Well, exhaust downpipe is installed. Speedometer cable is hooked up and routed. Clutch line has been installed and bled (need to probably bleed it a bit more). Accelerator cable is installed and works nicely. Had to do some minor adjustments to thin down the ball end for the pedal, shim out the threaded portion (longer on the ute cable) with a washer and modify and make a retainer for the cable from the original mount and some stock metal but overall pretty easy.

Did a power on test today. Hooked up a battery charger for 12v and tested the electrical system. Also added in a ground from the block to the car while I was at it. Looks like I will be tracking down a bunch of electrical issues, some probably original to the vehicle. Some due to the swap it looks like.

Good and the bad:
Starter engages with ignition switch. But fuel pump does not come on unless power is applied directly (pump works just not getting power on from relay). Only the right front blinker works and none of the tail lights work (could be bad bulbs or faulty harness). Wipers work, heater fan motor works, radiator fan motors work and push a lot of air, headlights don't work. Ignition switch doesn't appear to apply power correctly to the key on position (it has a bodged in B210 electrical switch so that may be the issue). Applying power directly to the key on 12v causes the relays installed for the KA swap to pulse (likely inadequate power supply for 12v on). Best guess at this point is a poor 12v positive into the control box. Note: I used 2 spare #14 brain boxes instead of my good one to test with just in case there was an electrical issue.

Unfortunately it was already getting late and both of the meters I could find had dead batteries so I stopped work on it. 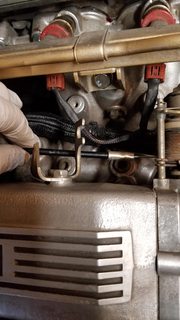 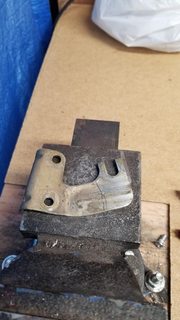 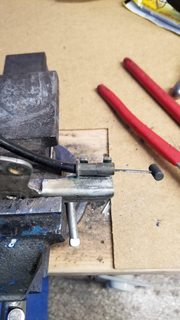 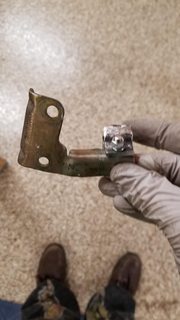 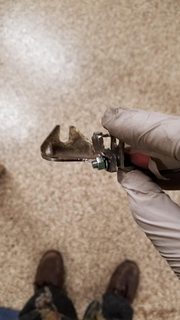 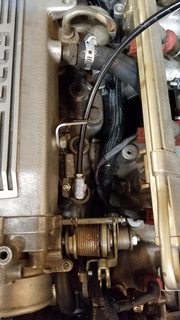 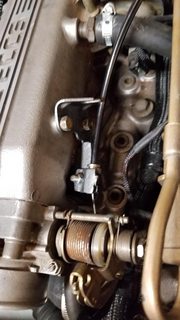 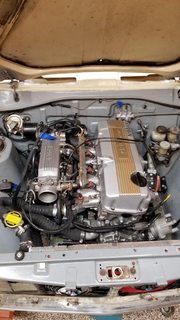 After further dickery with the electrical system involving a meter, jumper cables, and the battery out of the F150 I have gotten some stuff working, broken one other thing, and left with some head scratching.

Short version, everything I wired up appears to be fine. The stock under dash harness and electrical setup is weirdly fucked.

For the KA, I applied power from a battery this time and the fuel pumps kick in and turning the key turns over the engine, fuel pumps kick off shortly after (time out for no engine start). As far as I can tell this is all correct and some of my earlier problems were due to the janky setup of using a battery charger instead of an actual battery, something I had a suspicion of.

For the stock dash wiring the emergency flasher was working correctly and suddenly failed letting the magic smoke out, but out of the damn switch not the flasher. It now blows the fuse consistently with the switch engaged. Go figure.

Did get the lights working, sort of. Figured out the headlight switch gives working headlights, tail lights, dash backlight and markers, but only in the first position, (which should not turn on headlights) completely dead when fully pulled out. I pulled the switch and tested it with my meter and got 2 functions so it appears to work and the problem is further up the harness. Stop lights worked once and then failed (bulbs are heavily corroded and I'm amazed they worked at all, will need cleaning on the base and replacement before I retest them), but at least the wiring harness seems functional.

Right blinker works, left blinker blinks once and blows the fuse. The weirdest part is replacing the fuse caused the fuel gauge to suddenly read full (tank is empty). Not sure what is going on there or if it was doing that before it popped the fuse.

I've got a new ignition switch and whole lock mechanism ordered so that will clear up one problem with the hacked together wrong ignition switch it has now (I also did not have a key for this car either).

So more monkeying with the 1200 dash wiring, probably will pull out the instrument cluster and see what is going on, need to install the tach anyways so it would come out either way. Thankfully, I have many years of experience troubleshooting 1200 electrical issues so this is all reasonably solvable stuff, just somewhat unexpected.

Still need to buy some battery wire and a battery and set it up. Pretty high chance for right now it will be the F150 battery on the passenger floor temporarily for initial testing as I don't drive the truck much and the battery comes out with 1 bolt and is brand new. Been daily driving the B210 lately as a 5spd manual F150 sucks to drive in heavy stop and go traffic up hills (my daily commute because Oregon City).
aka Dguy210
Top

None of that sounds fun. Especially the OC commute part.
When the only tool you have is a hammer every problem starts to look like a hippy.
Top

Update: "The weirdest part is replacing the fuse caused the fuel gauge to suddenly read full (tank is empty). Not sure what is going on there or if it was doing that before it popped the fuse." Evidently this is a known symptom of a bad sender unit. Will test resistance (grounds through sender) before replacing.
aka Dguy210
Top

New ignition switch is in, only took a month too, which is fast for me.

In my defense though I've had almost no shop time in the last couple months, wife's parents are staying with us this summer which means every weekend we need to do a roadtrip or go somewhere. We got back early today so I had some time to do shop stuff. Heading up to Seattle tomorrow and Monday though. Ugh

Remote battery cables also came in. Still trying to figure out exactly how I want to run those, spent a bunch of time under the car planning it out but still not sure which way I want to do it yet.

Had to replace the battery on the Sienna today also as it was the original (6 years old), it still started the van but I left the lights on for 10 minutes and it needed a jump. Which I consider unacceptable, so one trip to Bi-mart later to replace it and I now have an old but OK battery for testing.

Onto to further testing with my now donor battery. With the ignition switch correct it was time to do some testing for function. I had just gotten in some new ignition wires so tested for spark (yes), both fuel pumps engage, and kicks off after a bit if not started, and the engine turns over with the key. Pretty sure at this point if I dumped some gas in the tank I could probably get it to fire up. Also, set the phone up to take a video and tested the clutch pedal which does engage.

Did more investigating of the stock wire problems and pulled the bulbs to test, which although somewhat corroded and generally gross looking still worked surprisingly. Currently trying to get the brake lights to work first, they do not turn on at all, but with headlights on the brake lights do "dim" and then pop the fuse, so obviously the switch at the pedal is doings something but I have a short somewhere to ground, hence why they dim and pop the fuse.

Haven't gotten around to pulling the dash yet, although I did spend some time under it looking for burnt wires. I'm still not getting any instrument warning lights with power on though (oil, alt, etc... just nothing) also. Probably should stop messing about and just yank it and start rewiring but I'm not really looking forward to that job.
aka Dguy210
Top

Good tip, using the phone so you can be in 2 places at once.
When the only tool you have is a hammer every problem starts to look like a hippy.
Top

Gray wrote: ↑
Fri Jun 21, 2019 8:01 pm
Update: "The weirdest part is replacing the fuse caused the fuel gauge to suddenly read full (tank is empty). Not sure what is going on there or if it was doing that before it popped the fuse." Evidently this is a known symptom of a bad sender unit. Will test resistance (grounds through sender) before replacing.

If I remember correctly, it usually means the gauge is grounding out to the instrument casing or dash, that's what causes full when the tank is empty. Ran into that on a '65 Mustang one time.
Top

Did some investigating and a lot of pouring over the wiring diagram and finally figured out the stop light problem and likely the fuel gauge issue today. Wireloom running running from the front harness to the rear light harness was damaged and grounding to the frame. I'll cut out the bad section and rewire it at some point.

After the stop lights the next priority is getting the instrument cluster lights that are not lighting up (chrg and oil) to work so I know the sensors function correctly.

I still need to find an intake piece for the maf to throttle body, not sure what I can use aftermarket for that exactly.
aka Dguy210
Top

Haven't done much lately, got the wiring issue fixed and the stop/turn, etc.. lights work. Gotten to the point where I have all except the instrument light electrical issues solved. Swap is at the point I can test fire but I've not had a lot of time lately. Still trying to figure out how exactly to route the battery. Also will need to likely get a 510 driveshaft shortened.

And because I'm an idiot I'm working on getting another project car, a 510 this time.
aka Dguy210
Top

Well Yes, but no.

Anyways, almost all the electrical is finally sorted on the car, charge light comes on, oil light comes on, engine turns over, lights work (headlights still come on with running light position but I just don't care that much at this point). Oil sensor wire was bad on the engine harness, ended up running a separate line from the sensor into the plug for the dash harness, I will tuck it into the rest of the loom at some point in the future.

Battery cables are routed to the back and the battery will sit in the passenger side rear, still need to either buy or fab up a box. I ended up routing the positive cable along the frame rail and then next to the fuel lines I put in. I suspect when I finally get the car on the road, I will go through and retidy a few things. I probably should buy a battery at some point but it is still really tempting use the F150 battery as I don't drive the truck too much except in the winter and the battery is brand new. The old Sienna battery has been good for testing but doesn't have enough capacity left to turn over the motor reliably.

I've also been working on the cold air intake system to the intake manifold, couldn't find exactly the right parts so I've been modifying a KA24DE intake, mostly just need to make a mount and get it secured a bit better.

Next up will be getting the emergency brake setup (if anyone has pics on how this was done on a race 1200 with 510 wagon rearend that would be appreciated) otherwise I'm going to just kludge something together. After that it will be install a seat, and get a driveshaft shortened.

The 510 I bought is Aaron's blue 71' 4 dr shell. All paid for just waiting for him and Brian to drag it up or for me to go and get it. No hurry on either of our parts though.
aka Dguy210
Top
Post Reply
272 posts