Weasel is watching over me again, lol. 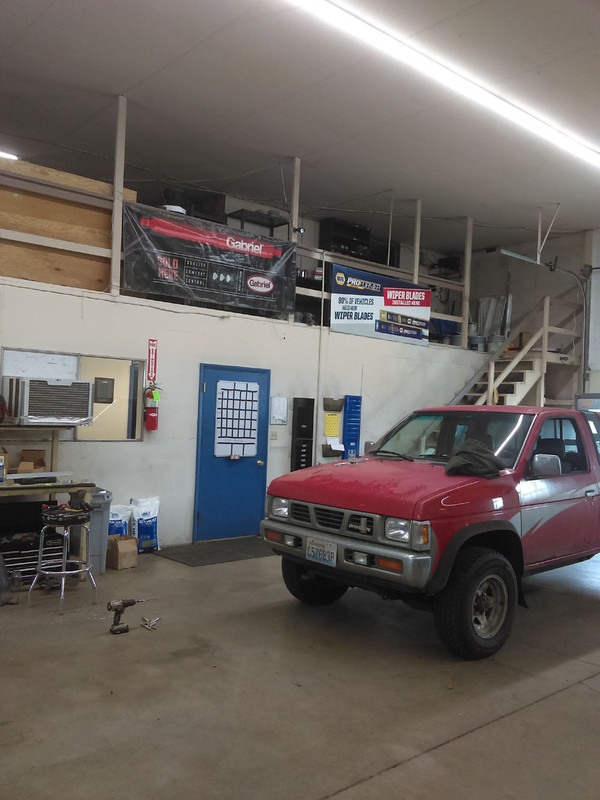 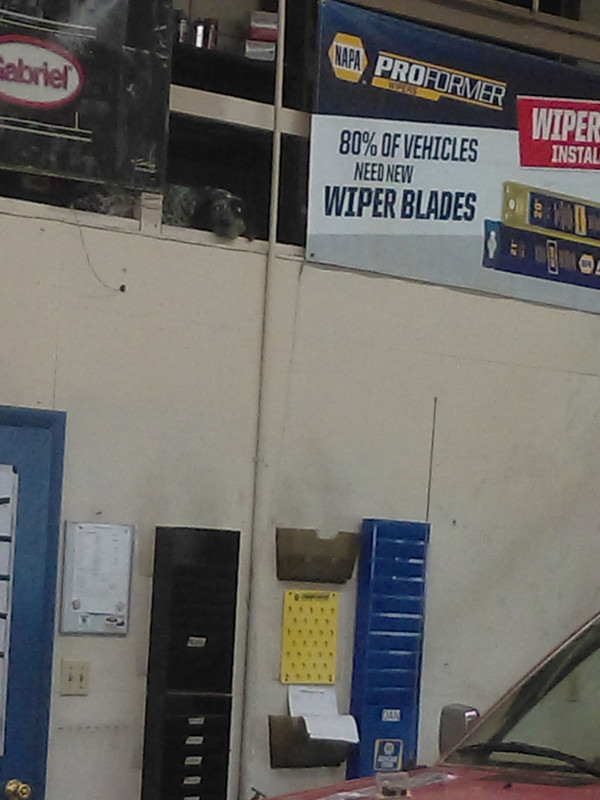 Here's the bottom of the radiator. Just needs to be held against it a smidge. Ended up putting a small section of 5/8" heater hose squished in and sank a self-drilling screw through to hold it. Simple, but effective. It holds in there mostly by itself even without the screw. 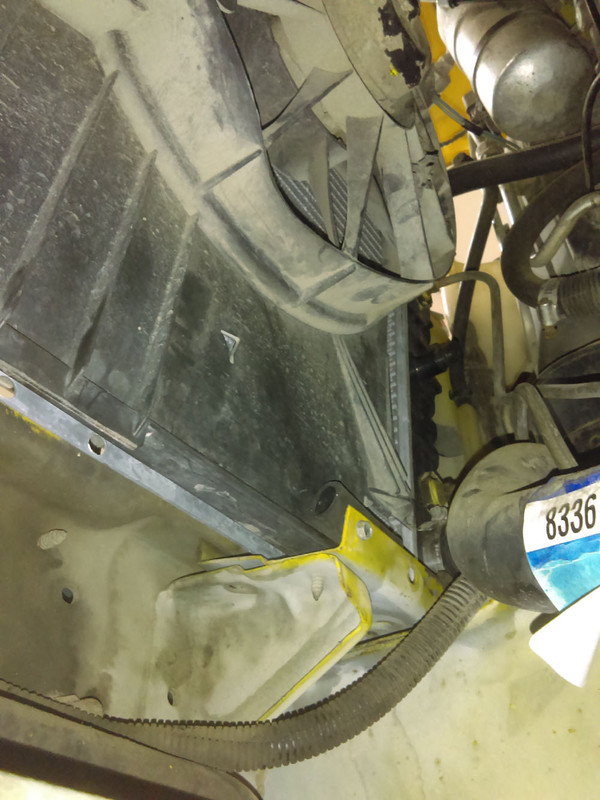 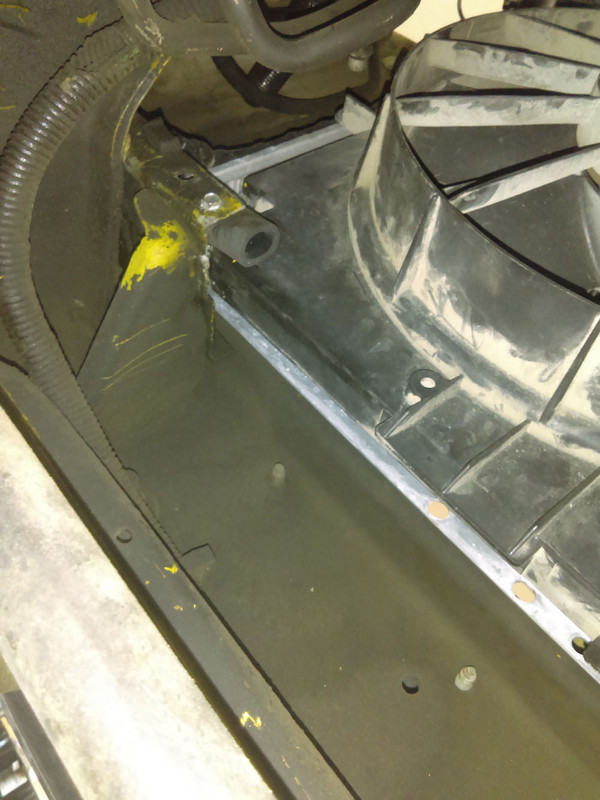 Here's where I mounted the little Hayden fan switch. Easy to get at but out of the way if I have to dig down in the engine bay around the side of the master cylinder. I'm using it as a ground for the relay, hence the wire wrapped up around to the mounting plate. 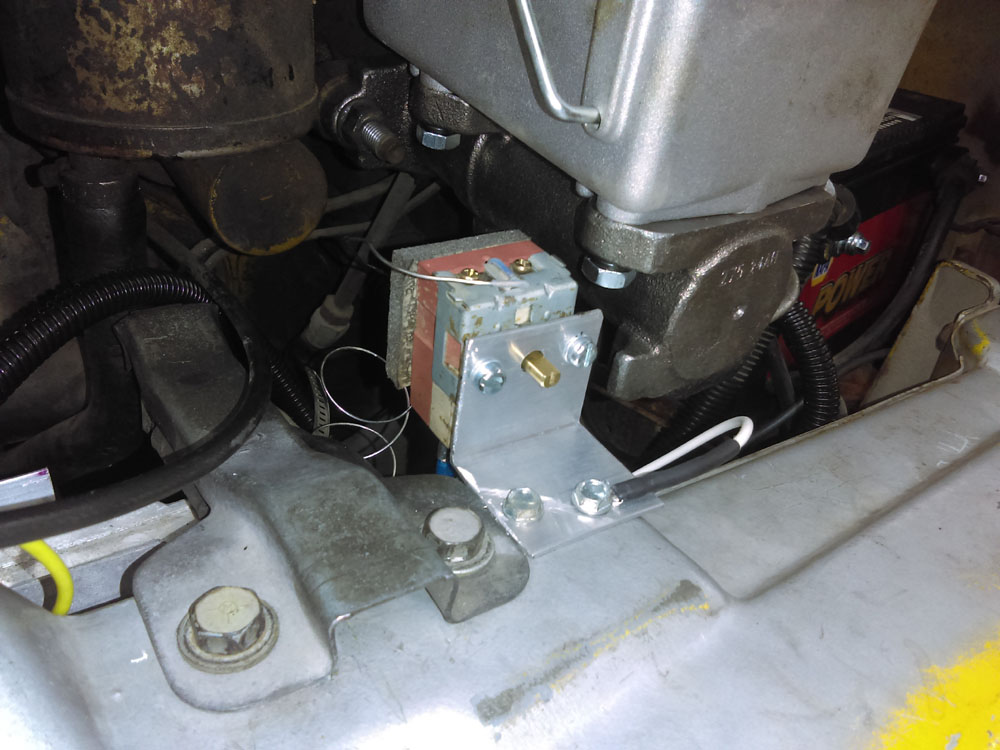 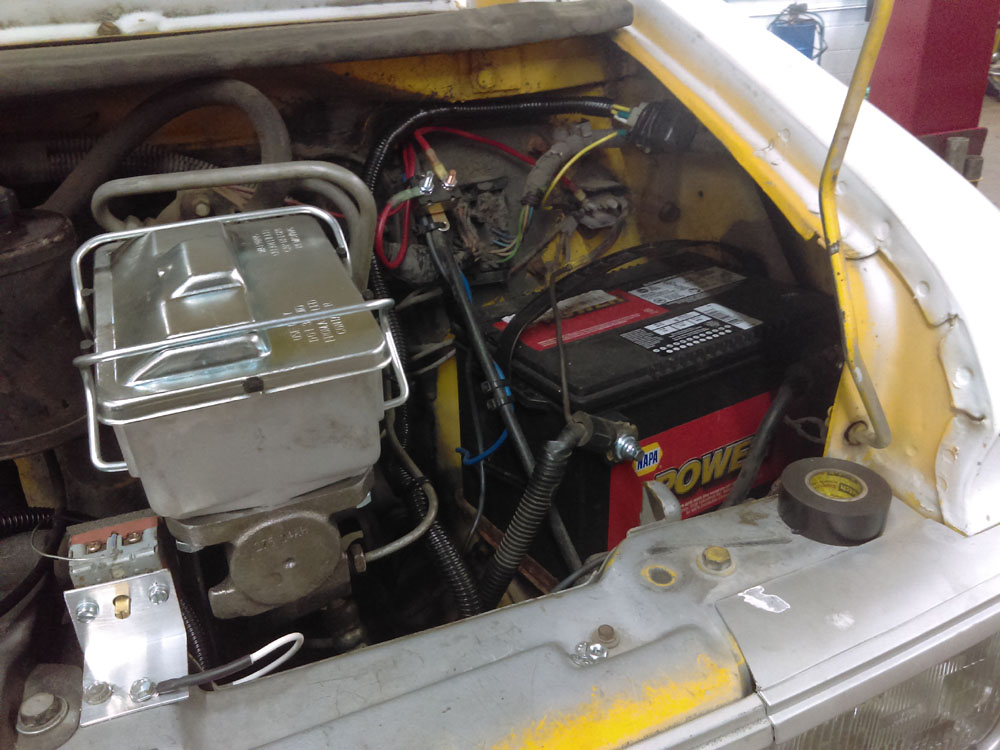 You can see the relay attached to the wire loom above the battery in the corner. It's a Nissan relay. 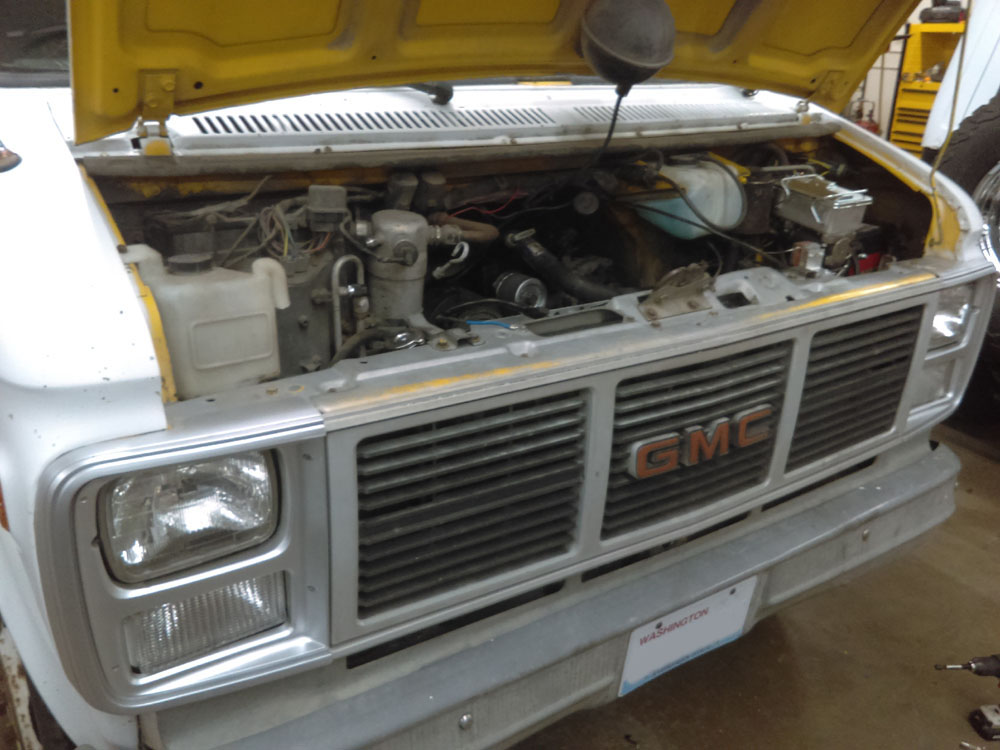 I mounted the probe on the top passenger as it was the only area left I could fit it without cutting into the fan shroud. The bottom of the fan shroud goes right to the edge of the radiator bottom, the driver's side has even less clearance. I'm probably going to get a piece of pipe insulation foam and run a small bit across the top of the radiator where the angle aluminum bolts on, that way I can isolate the temperature probe wire for better control. The fuse holder is inline on top. 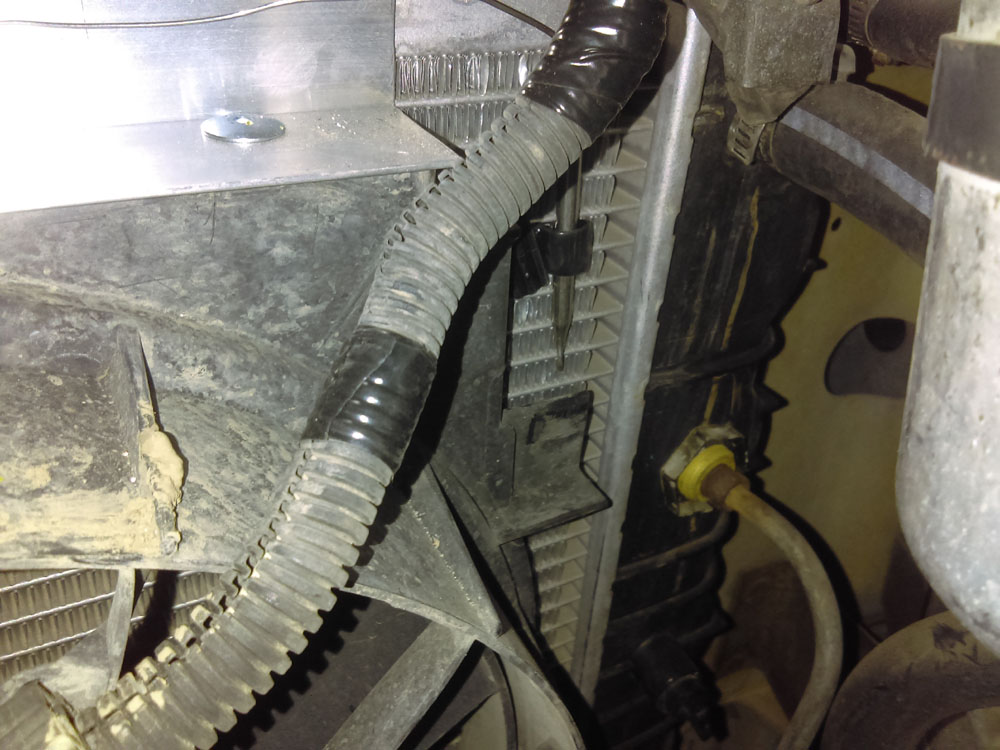 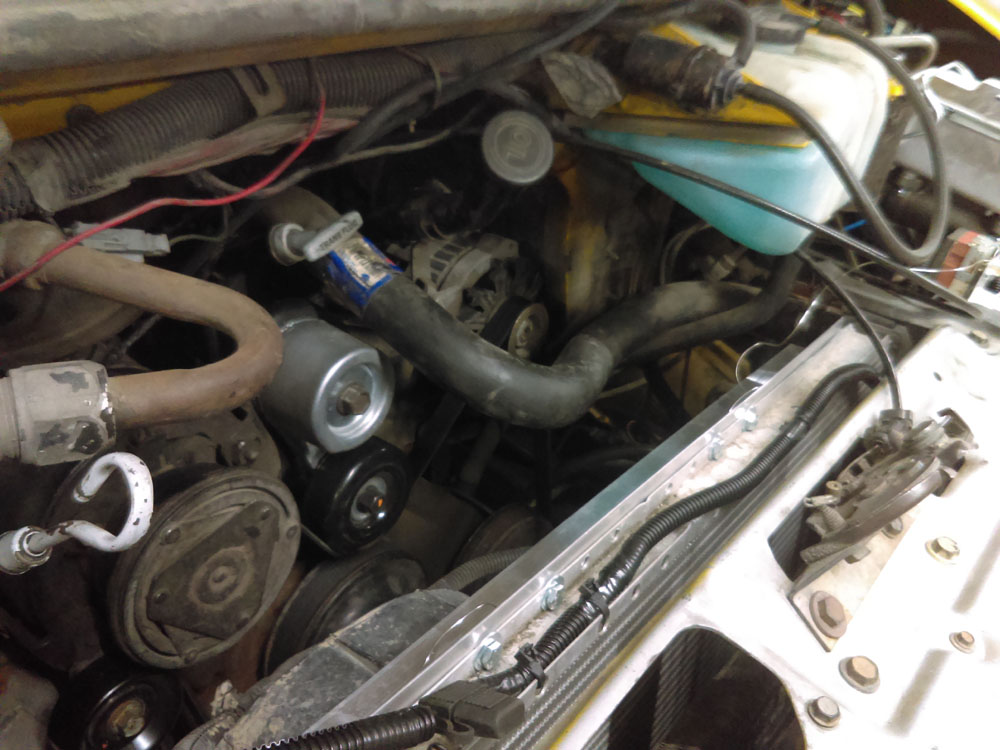 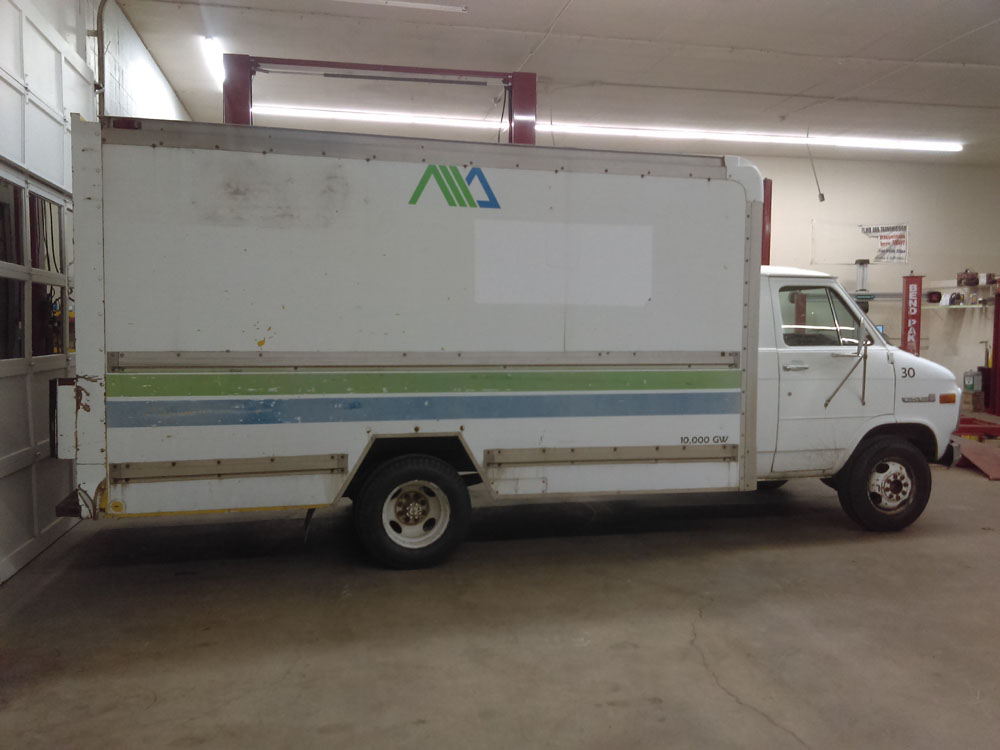 All in all, the fan setup was $50 from the wrecking yard. Pulls a bit more amperage than I was expecting, but I'm okay with that if it keeps the van from overheating at idle. It also gets rid of the mechanical finger cleaver fan. Between rivets, inline fuse, but connectors and whatnot, I'm in it less than $100 bucks for a really nice electric fan setup. One less thing to fix on the box van, woohoo!
Top

You may want to consider moving the probe closer to the bottom of the radiator. Theory being, if you ever develop an unnoticed leak on the road, the top might run dry but the bottom will still transfer heat. A toggle override might not be a bad idea either. I have trust issues when it comes to aftermarket electric fans.
When the only tool you have is a hammer every problem starts to look like a hippy.
Top

Yeah, I had planned to have it lower, but no space. The good news about the override is I can just jump the two contacts out of the thermostatic switch if it fails and then it's on. As long as I keep an eye on the temperature. I'll see if there's somewhere on the bottom I can cut the shroud a little but I'll try it this way first. I think it will work ok.

I have IGN in fusebox in van for power, the electric fan switch completes the ground side of the energizing relay.

I just remembered, the only bottom space is on the passenger side and the probe doesn't reach that far where it's mounted now. The other thing I may do is put a fitting in the upper radiator hose and run a coolant fan switch like I did with the wagon. That would be infinitely better. Figure I'll just get a piece of aluminum and weld a pad and drill and tap for the coolant temp switch. Pegasus racing sells some nice ones that work great.
Top

Just ordered a 200 degree Setrab fan switch from Pegasus. That'll be much better than the pot box. Don't have to worry about setting it either.
Top

Man, I love spending your money.
When the only tool you have is a hammer every problem starts to look like a hippy.
Top

Not too hard, is it? Good news is its getting closer to tow ready status!
Top

Has it not been on the verge of needing to be towed this entire time?
Top

Nope, I never had one doubt! 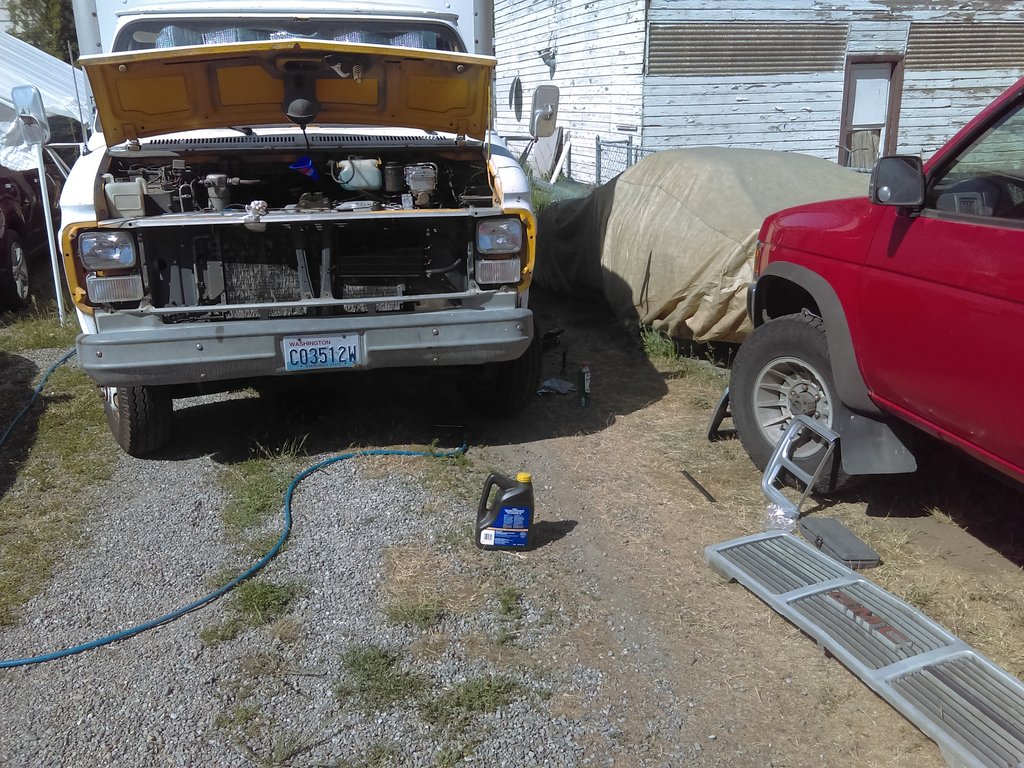 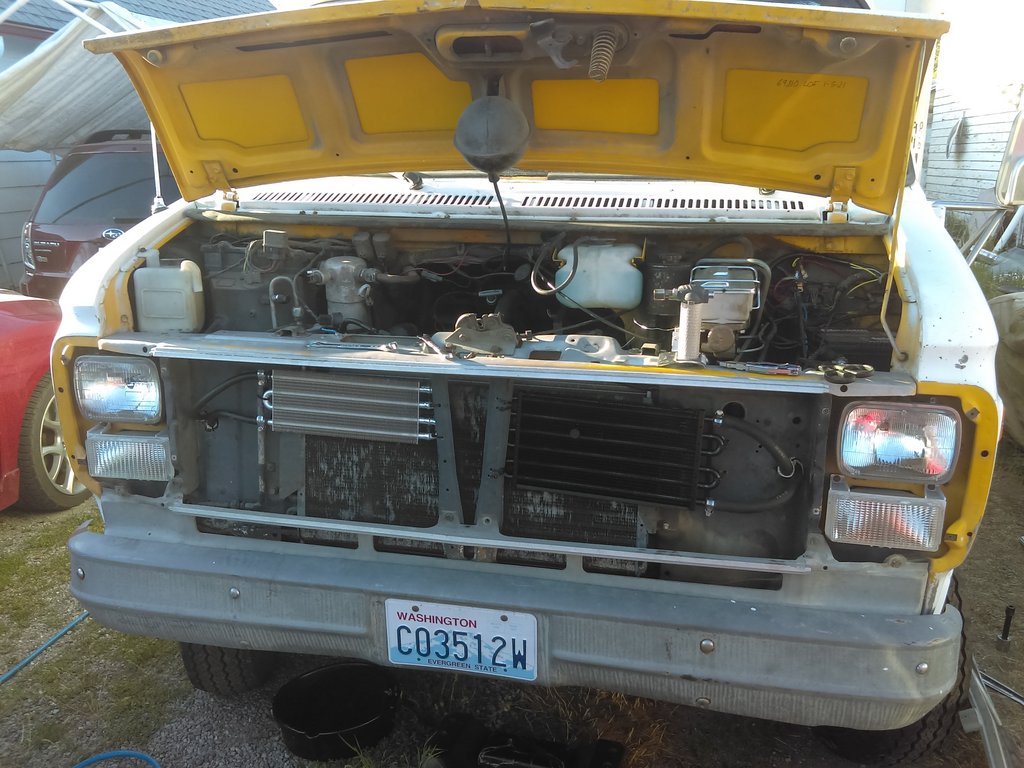 So yesterday I overdid it. Got my second covid shot about 9:00 in the morning. Then I decided to stay outside all day in the 80° heat and work on the van. I felt pretty good until about 6:00. Short of it is I got the engine oil cooler mounted and the transmission oil cooler mounted. Added about a half quart capacity on the transmission cooler and about a full quart on the engine oil cooler.

And last night as I was laying in bed with dry sweats and cold sweats and hot sweats and 101° temperature I figured out how to wire my fan so I can make sure it comes on with the AC goes on. As for today every ounce of my body hurts. Fever broke the only 100° now I think I'll be better by the end of the day.

I also fixed the windshield washer squirters. And tightened up the AC condenser which will hopefully stop it from leaking AC fluid so I can actually have AC.
Top 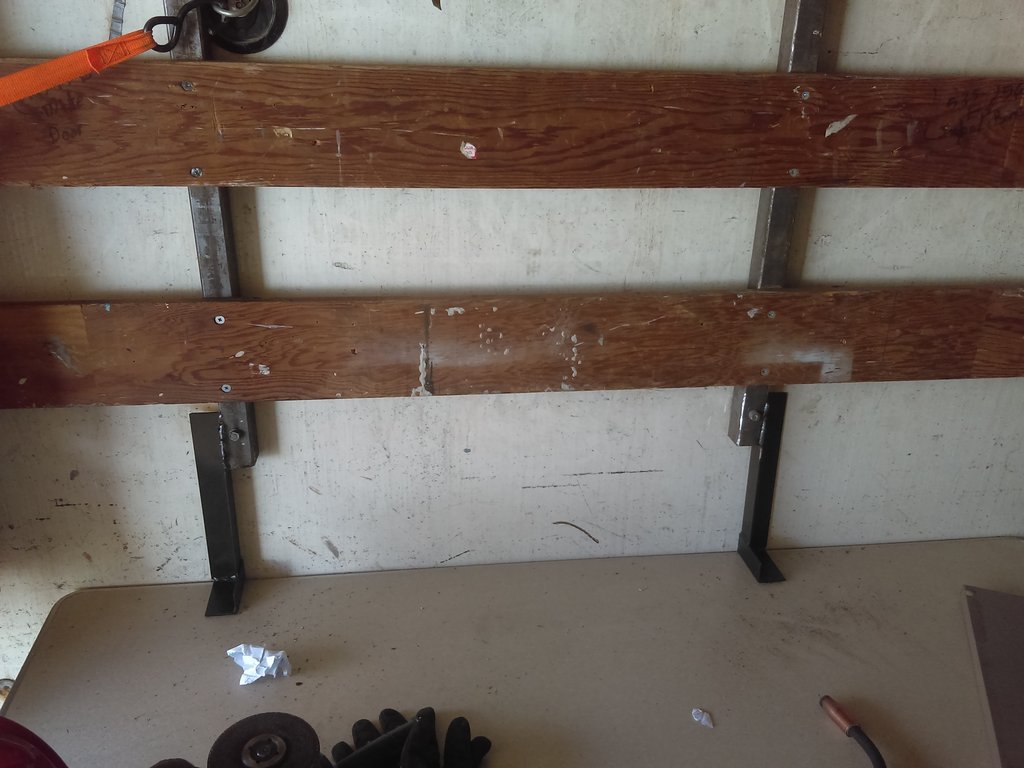 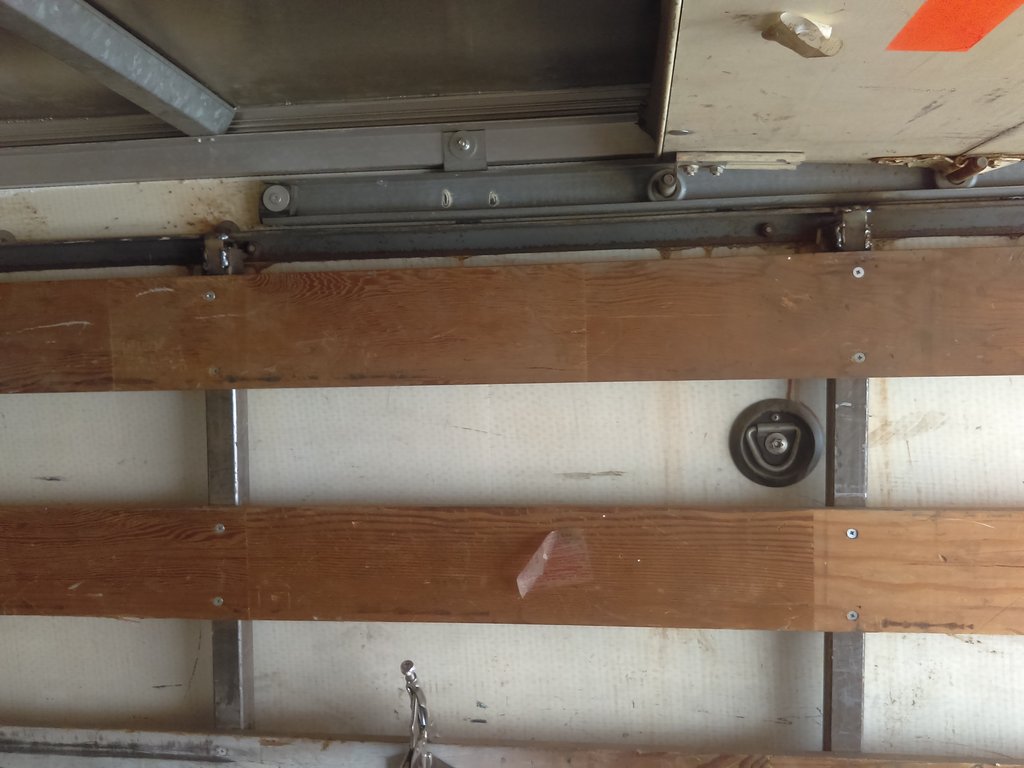 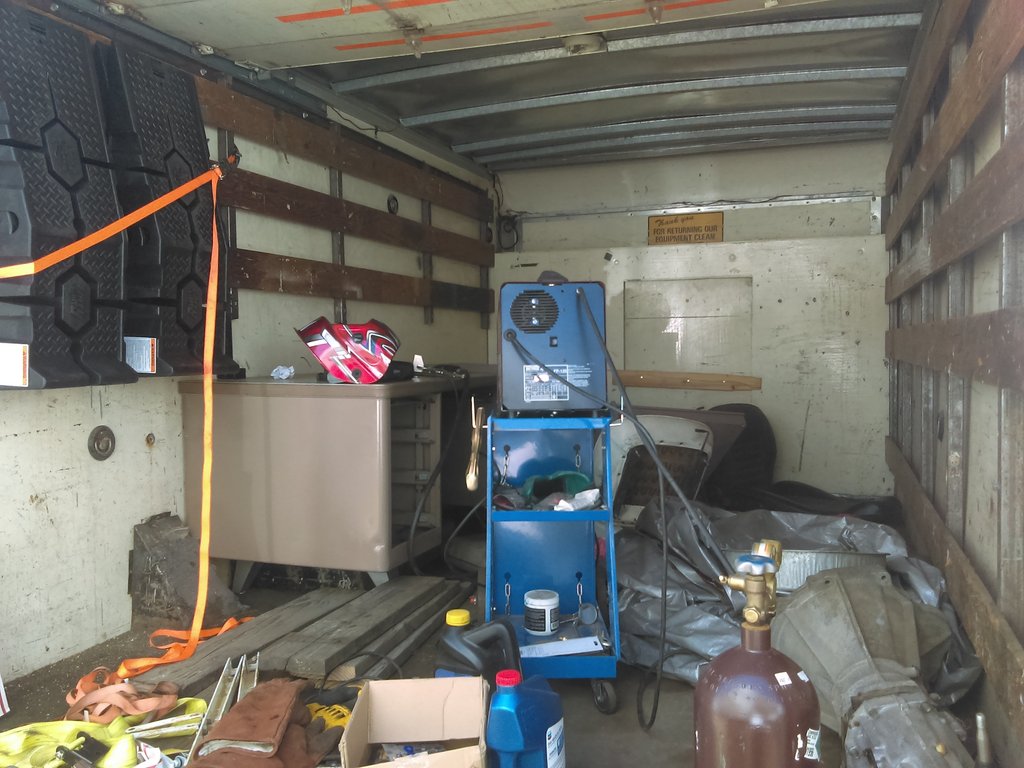 So I have today off for the holiday and I'm fixing up the box van. some of the interior stuff has been a little amiss in fact I'm looking the hole through the body right now because it's missing a bolt aside from that the racking on the passenger side had two welded broken loose on the uprights. so I cut a little piece of angle iron and stuck it in there and welded it up so that'll stop that from banging around. the next thing I had was the desk I put in here so I can load it with supplies and stuff. I probably should have got a nicer desk but this one was free so if the price was right the locking mechanism is all jerked up on it and I can't make it work except for about four of the drawers.

Anyway I made a couple of brackets out of some old angle iron which is actually from a bed frame which is really nice angle iron it's not perfectly flat because it's ridged but it's super strong and old bed frame so free. Anyway just have to anchor through the bottom bracket into the desk but a plate on the bottom and the desk will be secured as much as it needs to be. then I need to make some sort of a bar or something that locks the drawers into place while I'm driving. I'm pretty sure they make something like that prefab but I'm going to see what I have around here for scrap iron that'll work anyway.
Top

forgive the grammar I'm using speak to text because I'm too lazy to actually type all this or go inside and use the laptop because I'm not at a stopping point yet.
Top

As you know, that desk is heavy as shit. And it’ll only take away from what you can haul with it.
Top

The desk isn't heavy. I can lift it. Beefcaaaaakkkkeeee!!

It will be used for storage of car parts. Remember, the plan is to turn this into a relaxing at the track retreat. So it'll need a vise (just bought another one) so I can mount that to the desk for fiddling with car parts, and it will need an AC unit to keep it cool. I'm probably going to go with a house unit and a small quiet generator to run it inside the box. Figured I'll use the front section and make a noise reduction housing for it, pipe the exhaust and heat out of the box on the side somewhere. The only problem I have otherwise is there's no man door. I can pull down the roll up door, but that also looses all the heat. Soooo, I'm thinking I may need to cut the side and install a man door, unless I want to use the pass through in the front for access, which I'd rather not. It's hard to crawl past the seats. I don't know, I'll figure something out.
Top

Install man hole cover in the floor.
You can play Teenage Mutant Ninja Turtles when you're away from the track.

Man hole cover in floor has many uses.
Top 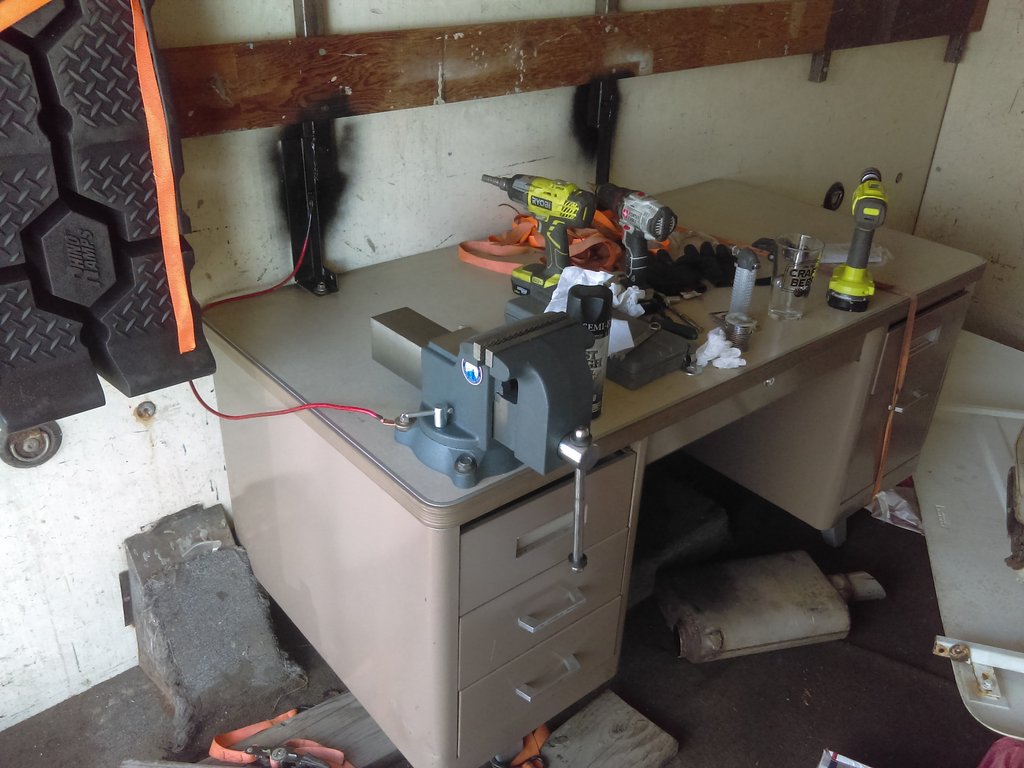 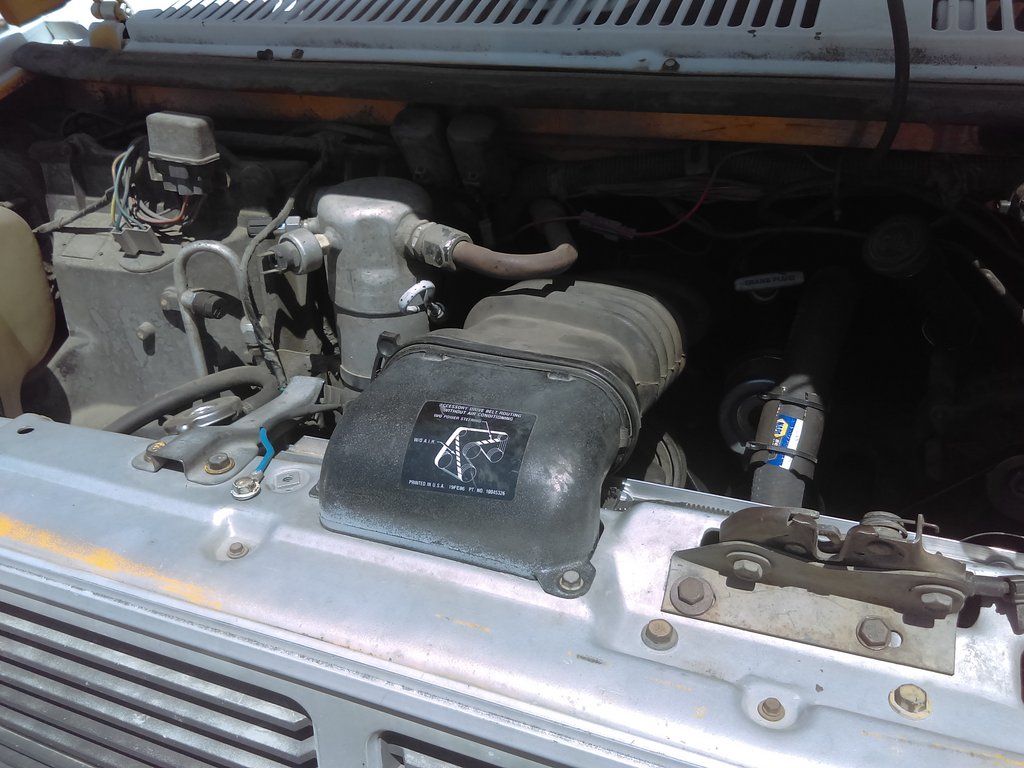 I had to pay 60 bucks on eBay for an air tube for the van but it will be well worth it on hot days. Otherwise it just sucks hot air from the radiator.

Mounted the new Wilton vise to the workbench this morning. the rear bolts are tied in to a metal brace that goes along the top but I made a ground strap anyway just in case. That way if I'm welding in the van I won't have any issues with grounds.
Top 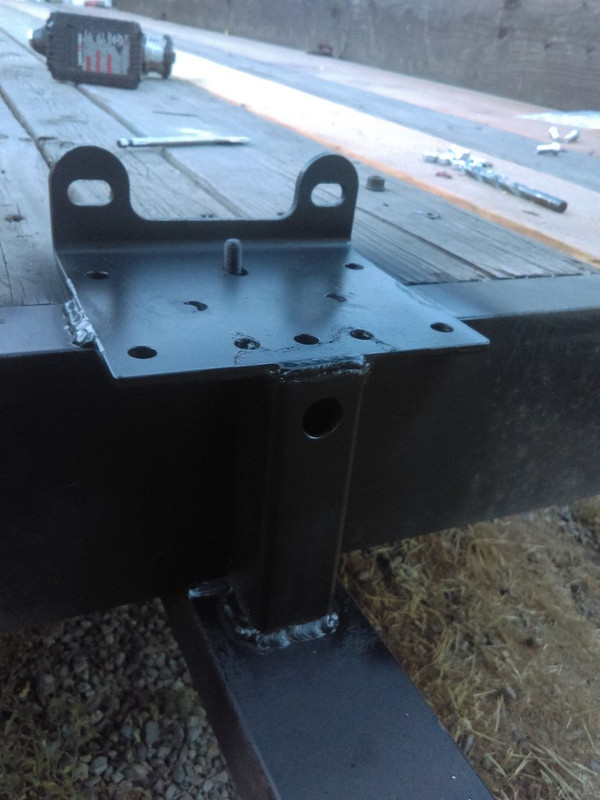 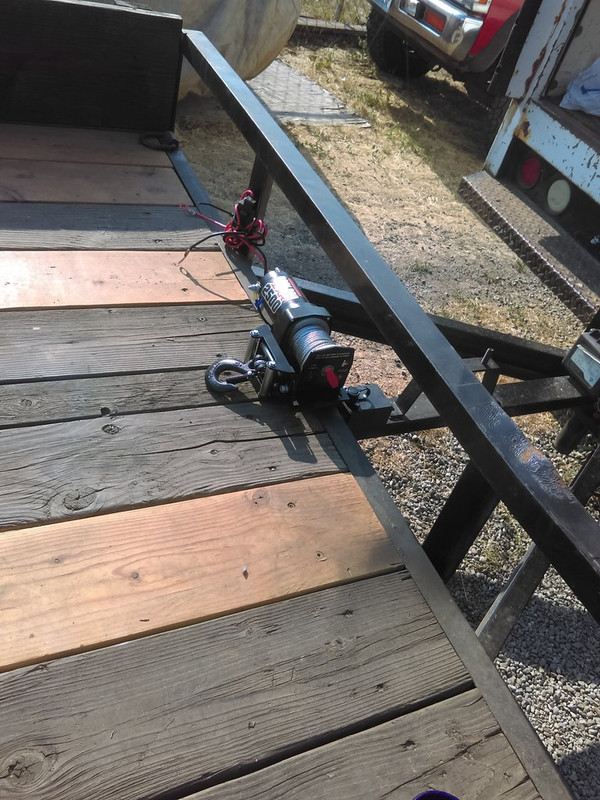 Welded in the harbor freight winch plate and put a 2500 lb ATV winch on the trailer. had a pain getting the rear bolt in through the hole and secured and then I thought while shooting anybody could just yank it off so I put a bead across the back plate as well. Used it today to get the wagoneer it worked flawlessly! See the D21 build thread.

I would make the winch quick release, then take it off when you dont need it there/keep it out of the elements/ maybe use it for other things... But thats just me.

I actually thought about using one of those winches to turn into a motor for a cart to haul stuff around the property.
Top

I sprayed down the cable with Fluid Film tonight, the rest should be IP67 rated. Theoretically as long as I coat the cable to keep it rust free, the rest of the housing should be impervious to the elements. I thought about making it a quick release, but I also didn't trust just a couple bolts holding it on. Probably overkill, but it's a cheap winch. Hell, I had one on the four wheeler growing up, ran it through mud, water, snow. It never cared. Just kept working. That's also why I got an ATV winch, not a trailer winch. Good enough for beating off road, good enough to sit on the trailer permanently.
Top
Post Reply
40 posts