Jig
When the only tool you have is a hammer every problem starts to look like a hippy.
Top

Yeah, I woke up this morning and thought about the predicament. Makes sense the left upper arm is farther out if the axle is shifted right. Fuck all. Haven't measured the lower mounts yet, but either way the axle has to come back out and I'll have to redo one or all mounting points.
Top

Dammit. Confirmed. Lower mounts are an 1/8 off to the left, which forces the axle right. Time to put the wagon outside after I order a car cover and build a jig.
Top 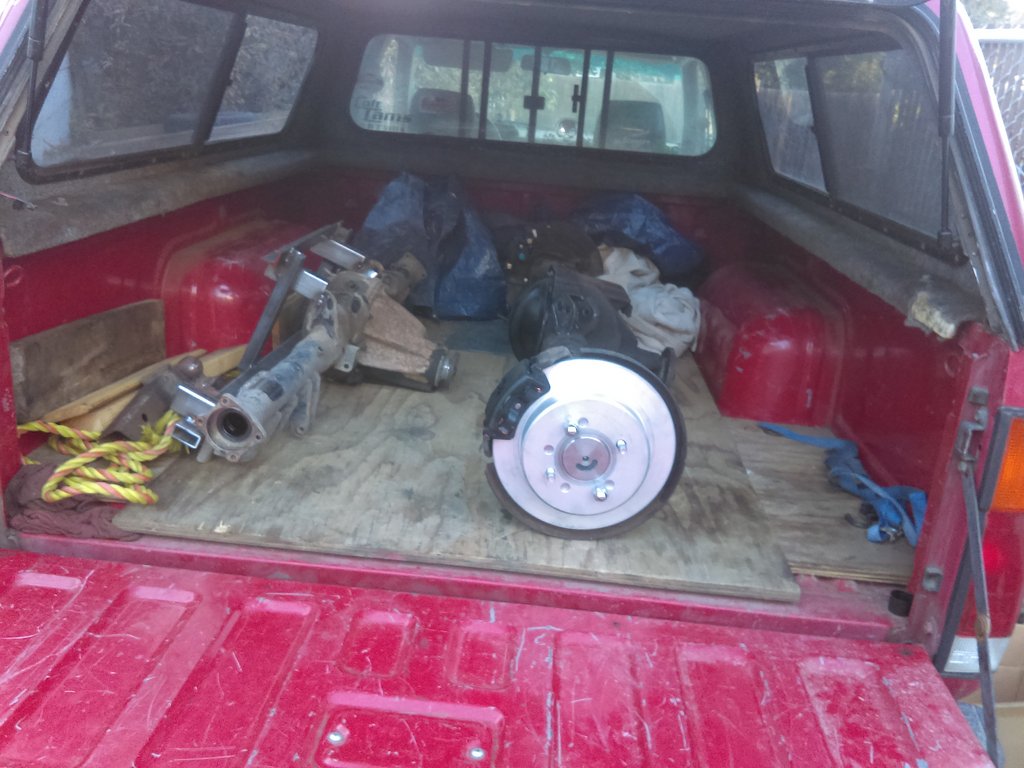 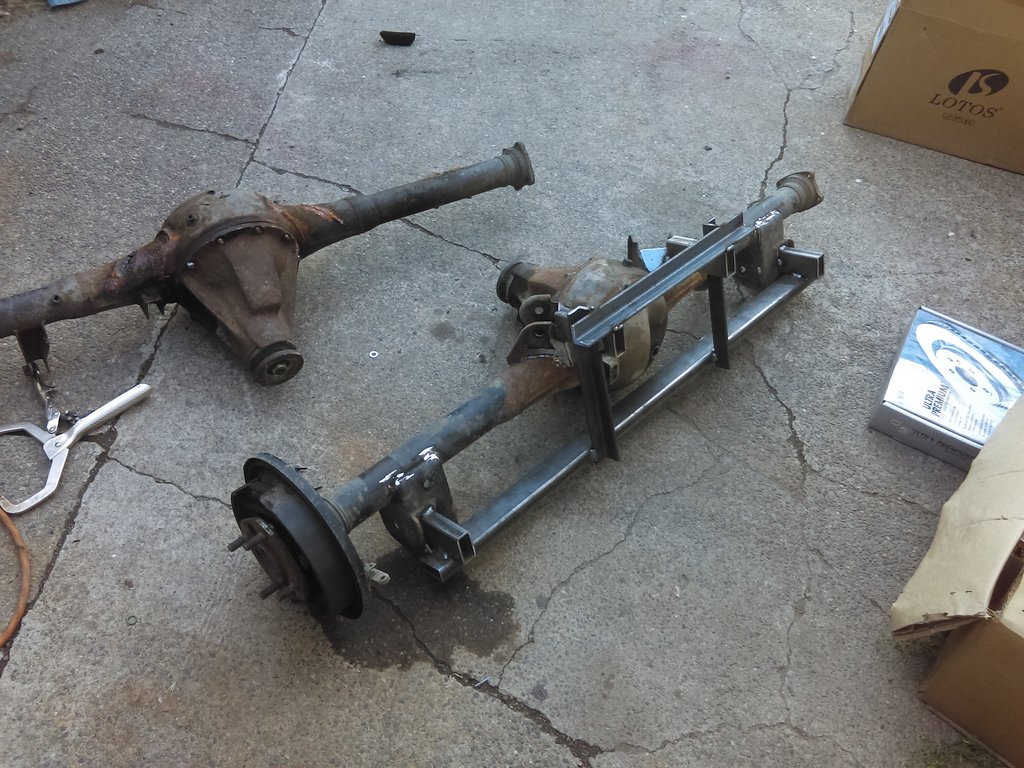 Got the jig all done and loaded the 8.8 into the truck by myself. That took about all I had to muscle it up on the tailgate. Interestingly, the pinion is offset by a lot on the original axle. I think that may have been some of the issue. Anyway, hopefully tomorrow I'll drop it off at the Datsun gurus and the next go round will actually work.

I started up the wagon and ran it for 15 minutes today, all seemed good.
Top

Well, I figured out how the axle mounts got screwed up. Apparently when the Datsun guru cut and welded my axle tube, he allowed it to rotate 2 degrees. I figured this out today after noticing the left side caliper is at a slightly high position than the right side caliper. Fortunately the rotor shouldn't care where it's grabbed. The other thing is the axle does measure out to be square. I'm going to re-check everything after I get the car situated.

I did take the whole mess by the shop and I think he was more angry at himself than me, but I was told to take off all the mounts and clean the axle and he'd weld them back on. This was after he said it's 5 3/4" each side, and I said, put the tape measure up, it's 5 7/8 on this side. Basically, he doesn't want to fix it and argued with me that it wasn't that far off and I want things too perfect and it took him 10 hours to get the project done. Sigh. Being I've had a good working relationship with him, I didn't burn the bridge, but I loaded up my axles and I doubt I will be going back. I've known Joe a lot of years, but this is pretty much my end point for personal large pieces. Especially since I offered to pay him more than our initial amount. I may still use him for small welding projects for the shop however, hence not wanting to burn bridges. Plus, it's just not good to burn bridges in general I've found. Even when someone has screwed you. He has done a lot of very nice work for me, so I'll give him the 99%, this is just the 1% that pisses me off. And to be fair, I'm certain if I dropped this project off at Hazzard Fab Works to get done, it would have cost me $1000-1500 in labor.

Talked to my dad who is an excellent welder/fabricator, we discussed multiple options. At the moment, the plan is to strip the bottom mounts on the 8.8, then stick it back in the car with the upper control arms equal length and driveshaft attached. I'll hold the diff with my tranny jack so I can position it how I want. That will allow me to see if the upper mounts are in the correct position. If they are, then I'm leaving those as they're the trickiest and I'll just re-center and weld the bottom mounts for the trailing arms while the axle is in the car. I'm hoping the top is correct. That would save a boatload of time.

The good news about all this is it's making me realize I need to become my own welder/fabricator. I've been getting more and more confident with my abilities as of late. I have some new equipment, I know way more than I used to. And being I do want things absolutely "perfect", unless it's the same old thing people have done a hundred times before, I'll always be dealing with one-off crazy Datsun projects. And most people aren't as OCD as I am. I'm just going to have to start doing more and working through any setbacks I have. Twenty years ago I wouldn't have dreamed of tackling this project. Now, I'm starting to get a good feel for it. And I've screwed up enough stuff through trial and error. Next step is a mini-lathe for making bushings and stuff. Eventually I'll inherit dad's big lathe, but I sure hope that's not soon.

Anyway, I'll update this as I get time, we'll see how it goes. Hopefully my driveshaft will be done this week and this weekend I'll make a day of it and get it done.
Top

Got the garage mostly prepped tomorrow for the axle job. Got some 6 ton jack stands to get the car a bit higher so I can use the transmission jack to get the axle situated where I want it. While I drug the axle out of the back of the truck, I decided to weigh it too. A narrowed Ford 8.8 for a 910 wagon weighs 216 pounds with 2 quarts of oil in, allegedly it takes 4. I'm not sure. I'll wait until it's mounted to put more in until it dribbles out the fill hole. I was wondering why it was such a pain in the ass to move the thing around. Sadly I didn't measure the factory axle. I'm betting it's more like 160-170.
Top
Post Reply
1066 posts