I just read threw since February. Sucky on the headgasket. Also, bigger intercooler is more important than bigger turbo. Also, NO SILICONE ELBOWS, they create airflow restrictions. Yes the butt dyno can tell. Oh and box off your intake, hot air intake is no bueno.

Let me put it like this. The CA18DET can put out 200hp at the wheels with just Intercooler/Exhaust and like 15psi on the original turbo (above 12psi is asking for it to die though). I fully expect my CA to put out 200. My intercooler is rated for a little north of 360.

That's a whole lot of reading!

That's why I got the water to air intercooler setup. It should be good for 350 horsepower I believe. It'll have much less heat soak issues than the itty bitty side mount I currently have. And yes I should have a lot less plumbing restrictions with that setup.
"Self proclaimed most active poster on NWD." - Me
Top 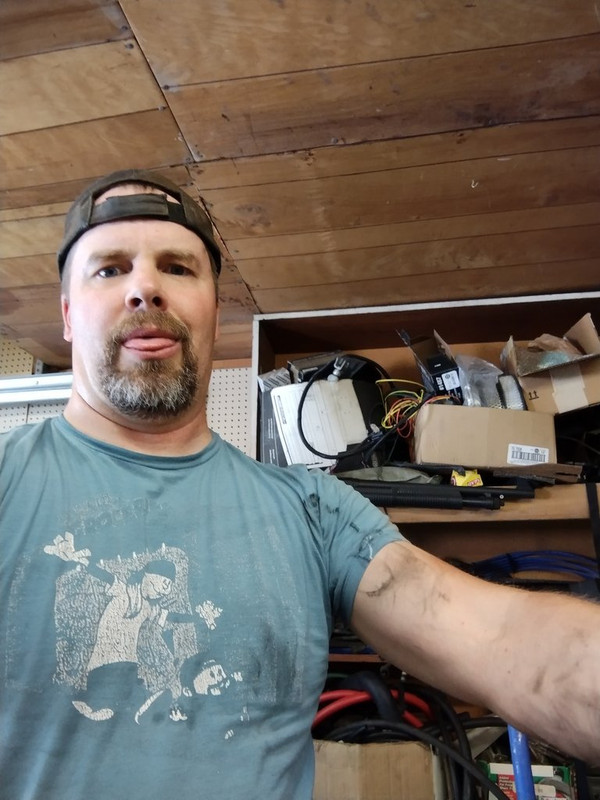 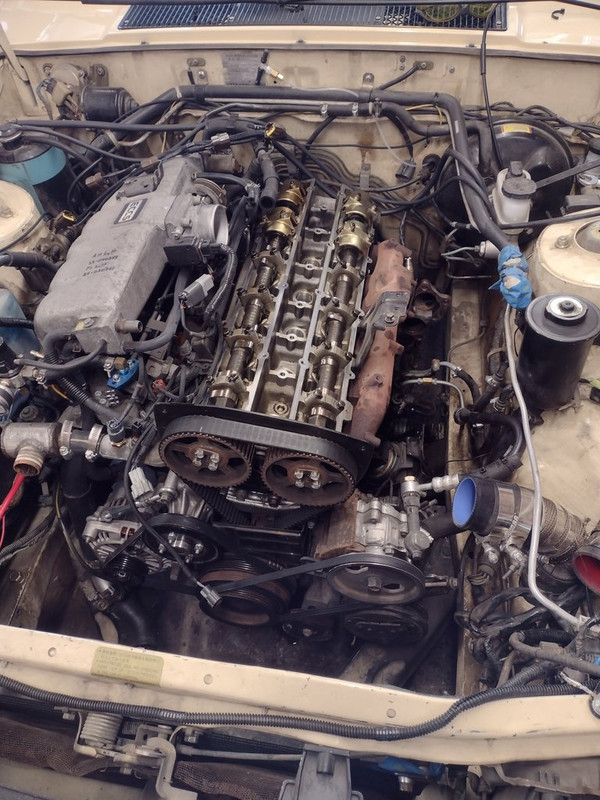 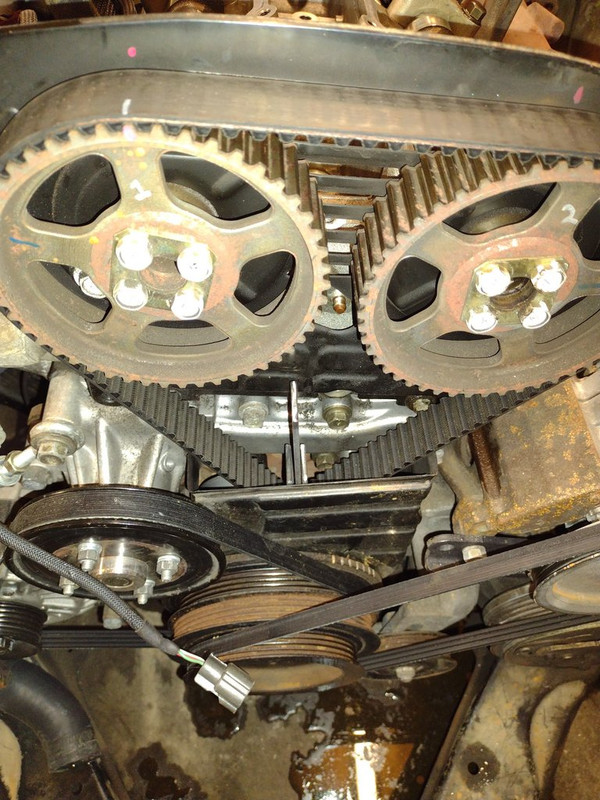 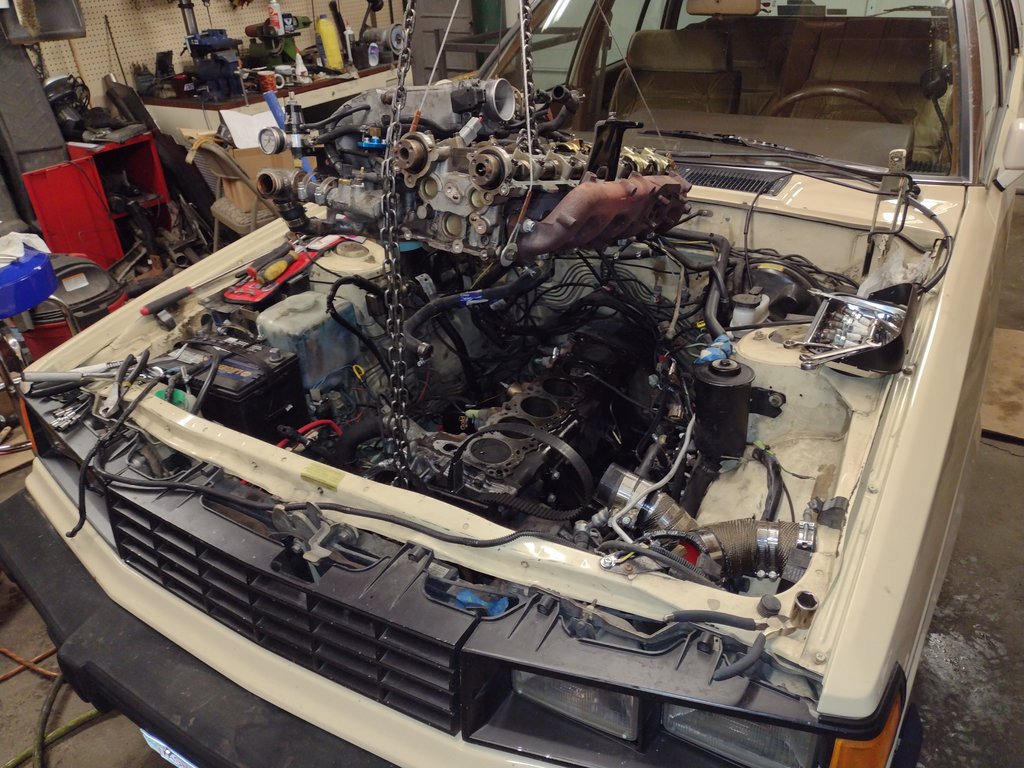 What a giant pain in the ass. I'm super dirty too.
"Self proclaimed most active poster on NWD." - Me
Top

When I was starting out as a tech we would get the occasional 2.5 Chrysler head gasket job. My "mentor" was a veteran Jeep/Chrysler tech and had a method called the slip-N-slide. Pull the timing belt and head bolts, lift the head, scrape clean, reassemble.
When I got my first one he told me to slip-N-slide. I waffled for 3 days and saved no time either way.

Hey Matt, WTF took you so long?
When the only tool you have is a hammer every problem starts to look like a hippy.
Top

Lol, so technically this only took me about 4 hours, not counting the 3 other hours I spent on getting all the intercooler tubing and the rest off prior to yesterday. The biggest issue is I haven't worked on an RB much. L motor sure, I know where every bolt is and how to get it out. Apparently there are 3 other head bolts on the RB, like the two at the front of the head into the timing cover. There's one hiding near the water outlet up front on the passenger side, and two little ones in back. The driver's side holds the bracket for the water to turbo tube, you'd think it would be innocuous, but no, it's important. And the passenger side rear is a giant pain to get to. A snaky 10mm on a wobbly on a long 1/4 extension. And the worst part was getting the stupid downpipe off. That was a bitch to get on, stands to reason it was a bitch to get off for lack of space and one bolt on the back.

Then I couldn't figure out which hose (and oil dipstick tube) was holding the head from coming off and I had to play underneath and remove the starter to see the back area. I could have undone one little bolt on the back of the intake had I remembered it was there and holds all the brackets on the back end for the water tubes.

So that's what took me so long, lol. It'll probably be worse putting it back together since I'm going to change nearly everything. Exhaust manifold had to be pried off too, gotta straight edge that. It may be okay to go back on, but it's definitely a little pissy.
"Self proclaimed most active poster on NWD." - Me
Top

Also, the RB dohc head is fing heavy! Like way heavier than the L motor. Makes me wonder why I don't just small block it. Because purist.

"Self proclaimed most active poster on NWD." - Me
Top

Posting here as well due to this being the most recent thread i can find.

I ran into a fellow a few weeks back in a residential area off Roosevelt Blvd.
He gave me a "surfs up" wave as i drove past on Nebraska and I backed up to talk to him a bit about our cars. He was driving a freshly painted White datsun pickup with black pinstripe, Nice wheels and deep throaty engine purr.
I don't know much about all the ins and outs of datsuns but he informed me about a local datsun club here in eugene with a few members and told me a story of a guy with a 210 Hatchback that mounted a jetted out lawnmower carb that outran some high performance hondas. I was hoping to get in contact with him or anyone else that would be able to help me do some engine work on my beater 210 wagon as it is my daily driver and I use it to commute everywhere i go.
I'm hearing some "pinging" or metallic rattling under the hood when i put the car under enough load to engage my accelerator pump on the carb.
I haven't really had time to go through and do a lot of maintenance or tune up the engine much due to being a single father and working a full time job. He did state he lives around the area and told me about a old 280zx sittin' in someone's driveway for a while. Informed me about a couple local meets that have happened recently and advised that I look up the group on facebook. Not much information was exchanged and wish i would have gotten his number for a text or something but I would like to get some help and get together due to being real new in the Eugene area (moved here July 3rd 2022). I appreciate any feedback and hopefully i can make some connections. New to posting on any forums of any kind so apologies if i am out of line on anything or am too lengthy in my post. Thanks all.
Top
Post Reply
1327 posts