I've been saying for some time now that I need to make project threads for my cars. Guess now is finally that time to get started. I got this car about 2 years ago from dan510, who got it from Adam, who got it from James(who I don't believe is on here). It's a 1977 710 wagon. Wife has a thing for goons, so it was an easy one to talk her into. When I got it, it needed ball joints, tie rod end, a brake master, and a carb. Somewhere between buying it and driving it home, the radiator decided to puke on me too, no fluids on the ground at Dans, but when I went out to my garage the next week there was antifreeze all over the ground, and coming out of some of the vanes on the radiator.ordered everything but the carb and radiator. Still don't have a good radiator cause they don't make em anymore, go figure. Then life decided to get in the way. Got married, work got insane, had to keep the dailies running, and the 710 was forgotten about in my driveway For a yeat and a half. Fast forward to about a month ago, and I needed to find a good stress outlet...so I started back into the wagon. 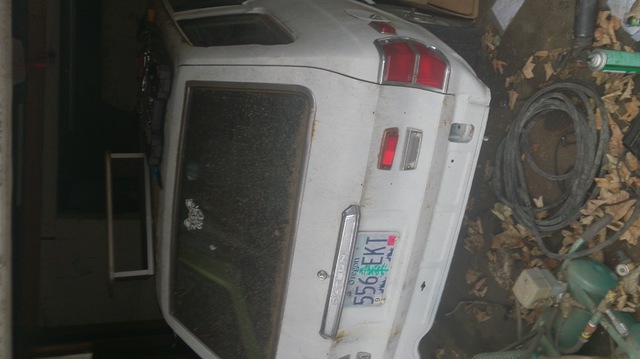 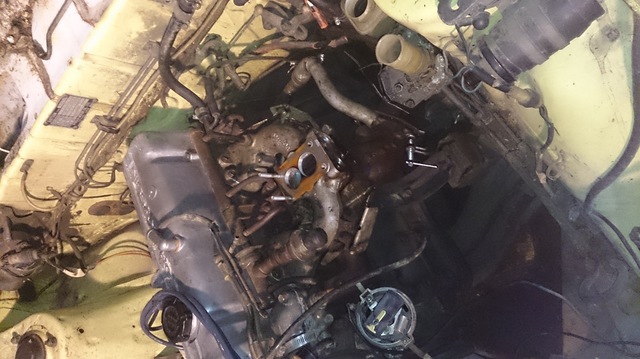 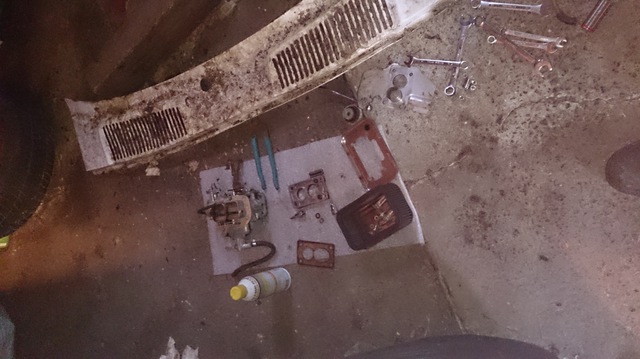 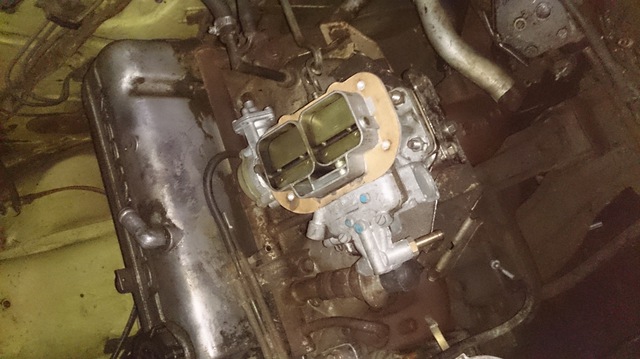 Then had to deal with linkage, since the one on the Weber was fabbed for the 510. So I jacked the shit off the back of the old carb. A flat head screwdriver and hammer works nicely when you don't have a flathead wide enough for the round nut on the end. 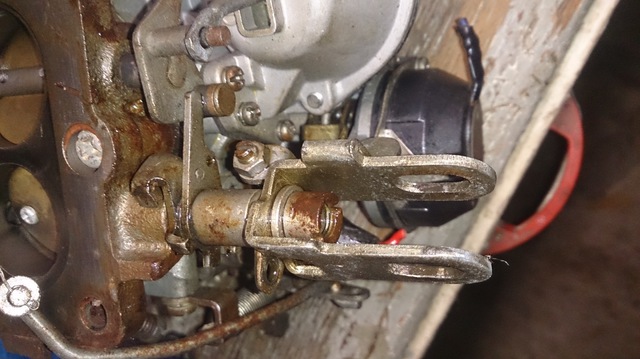 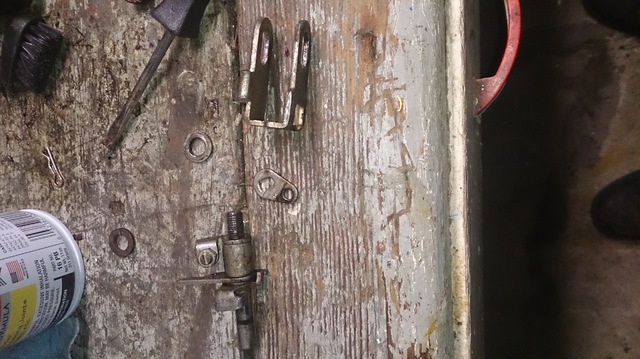 Had to pull this off the Weber. 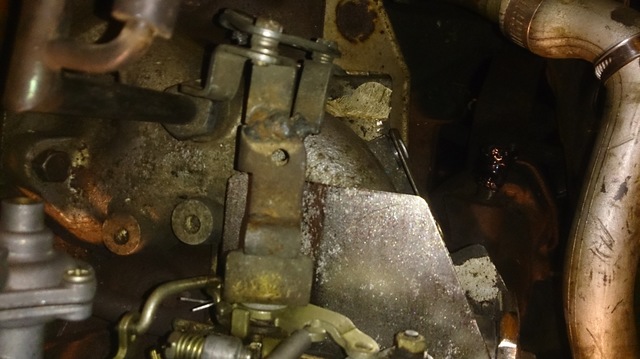 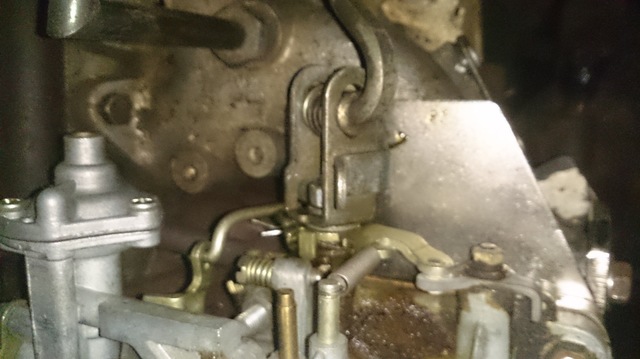 Also got bored at work and did this, cause why not have a shiny ass valve cover in a ratty ass car 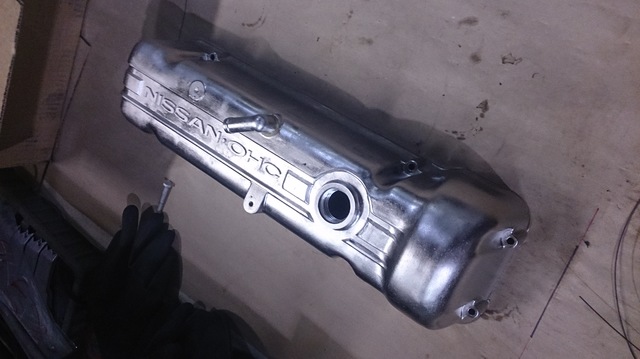 And how she sits now 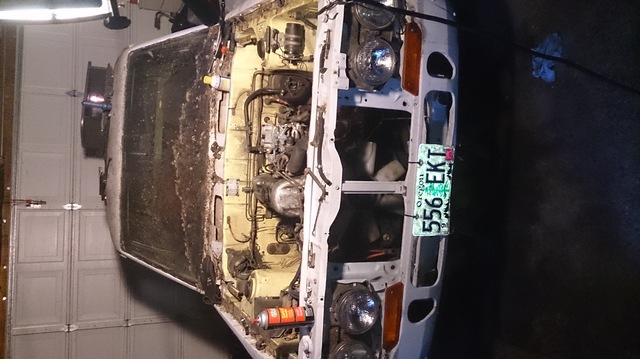 I had to steal the brake master for my b, but I have a z car 7/8 sitting around that I think I'll use, unless anyone has a good reason not to. Eagle Adam said he's done it, so I'm doubting there will be any major issues. Then I need to get some fuel line, and a good throttle return spring, get the radiator fixed, find one, or have one made, ball joints and tie rods, figure out what I'm going to do with the exhaust(will explain in next post) drain and replace fluids, and she should be good to go. Plus any cosmetic shit I feel like doing. I usually go slowly and do small amounts at a time, but I'll be sure to update as things progress
Top

So the exhaust problems are twofold. First is this 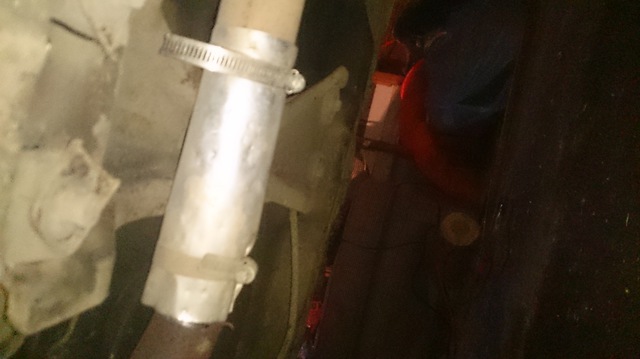 Looks like it got a hole and that was wrapped around it to fix it...haven't taken it off to see what's underneath yet. Secondly. 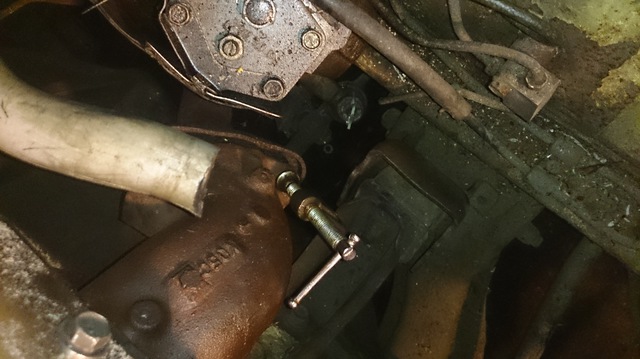 One of the three manifold studs is broken off, so it was c clamped down.not sure if I can just drill it out and replace it, or if I'd have to remove the manifold and pull it out. If Id have to pull the mani...fuck it, c clamp it is. Long as it works im ok with it, but if I can drill it out, I will
Top

Easy out(throw in some heat too),on a bench is your best bet to pull the stud

If there is enough of the stud left to get some vice grips on, remove the manifold, use a torch to get that area of the manifold red hot(not the stud, the manifold around the stud), hit the area of the manifold near the stud with a hammer, grab whats left of the stud with the vice grips and turn the stud out, it's really quite easy when it's hot.
If there is not enough of the stud left to grab, drill a hole in it dead center, tap an easy out in the hole, heat it up and hit the manifold with a hammer near the stud and turn it out, if that don't work then either get another manifold(best choice), or try to drill it just under the size of the hole and try and clean out the threads with a tap, this way is my last resort way as it hardly ever works out properly and I end up drilling the hole bigger and using a nut and bolt.
The "C" clamp could work for years, or it could fall off tomorrow, but it's a good field repair when in a pinch.
“The difference between genius and stupidly is that genius has its limits” Albert Einstein
Top

Like I said, not gonna pull the mani off lol. Not sure how long the c clamp has been on there, but when I pulled it off I needed pb blaster, and a wrench to smack it. Was on there so tight I couldn't get it off by hand. If I tighten it back down the same way, I don't see it falling off. May try the drill and easy out method though.
Top

Ya, there are some other plans in the works. But I wanna get it back to running status before I start upgrading shit
Top

If there is enough of the stud left,you could always weld a nut to the stud,and wind it out.

Now that's a helluva idea. I'd have to check clearances to make sure i could get a decent sized socket on it cause I know those studs are in there tight as fuck, but if I can that may be the route I go.
Top

Nice Job on that. Plus, I like the way you think!
Top

devilsbullet » Fri Apr 17, 2015 6:19 am wrote:Now that's a helluva idea. I'd have to check clearances to make sure i could get a decent sized socket on it cause I know those studs are in there tight as fuck, but if I can that may be the route I go.

It works well,as long as you can access to zap on some metal.

Nice Job on that. Plus, I like the way you think!

What's even better is I just cleaned it, didn't polish out the imperfections or dark spots. So when I plated it, it kept those characteristics. Still looks kinda ratty in person, but it's shiny ratty. Did the same thing to the carb hear shield, and my emissions block off plate lol.
Top

devilsbullet » Fri Apr 17, 2015 6:19 am wrote:Now that's a helluva idea. I'd have to check clearances to make sure i could get a decent sized socket on it cause I know those studs are in there tight as fuck, but if I can that may be the route I go.

It works well,as long as you can access to zap on some metal.

Pretty sure I can access it. Question is, will anyone that I know with a welder be willing to twist their arm into there. Cause my only welding experience was stick welding, which wouldn't fit too well
Top

Got the fuel line plumbed in. Battery is on the charger, if it charges fast enough I may see if it'll fire. I have the tranny lines and radiator hoses blocked up for now until I get the radiator situation sorted, figured I'd ask and make sure that wouldn't fuck anything up... 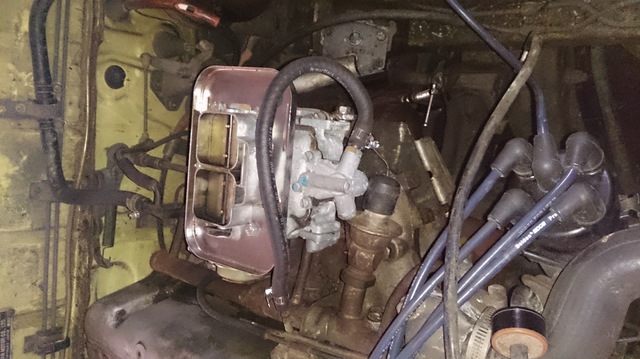 I'll also be adding random on my other cars as I work on them. On that note, changed the plugs on my z today, in hopes that would fix it's non running status, old ones were nasty. It was running Shitty and died on me about 8 months ago. I've changed cap, rotor, plug wires, fuel filter, coil, and now plugs to no avail. Granted, may not have had enough time cranking to get fuel to the engine yet, fucker vapor locks like crazy. Or at least I'm pretty sure that's what it is. If this doesn't fix it I'm at a loss. Fuel pump works, cranks fine when it's not acting vapor locked. Looks like cylinders 1 and 6 are super rich, and the rest were slightly lean. 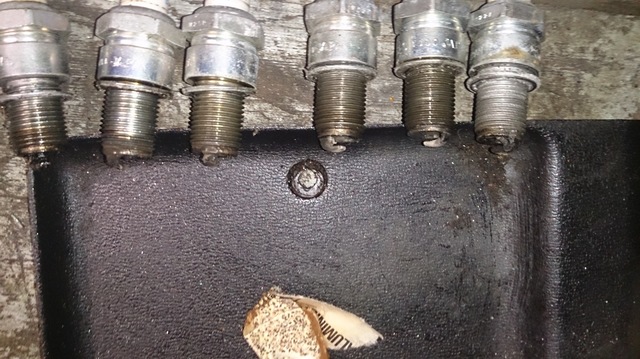