So this isn't really a build thread since there have been multiple build threads over the years and about 5 engines through Gracie II. Currently she's a '93 D21 extended cab 4x4 with a Pathfinder rear LSD and a 2001 Frontier KA24DE engine running on the regular KAE wiring harness and computer. Transmission has been rebuilt, as have the bearings and brakes and just about everything in the truck except the front differential. I have a megasquirt for her that still needs to be assembled. At some point I'll get to it. She turned 207,000 miles the other day. I bought her with 130,000.

Today I had to fix the exhaust. Found out my hole was a rip where there used to be a hanger. I went climbing through some snow piles the other day, I'm guess I loosened something. Heard a pitch change yesterday, found that hole. Fortunately I had some scrap hanger material. Please excuse the pig's breakfast welding. That's what happens when you're on your back on a creeper with very little space between you and the work. The next house will SO have a lift. Anyway, no leaks now, then went and installed the new 9003 conversion lights. Much brighter, much better. And easy bulb replacement! We started carrying these at NAPA from Trucklite. Aluminum housing, glass lens. They seem to be pretty decent. Aligned them pretty well, will test again tonight when it's easier to see where the pattern falls. Garage cement pad before door isn't exactly level. 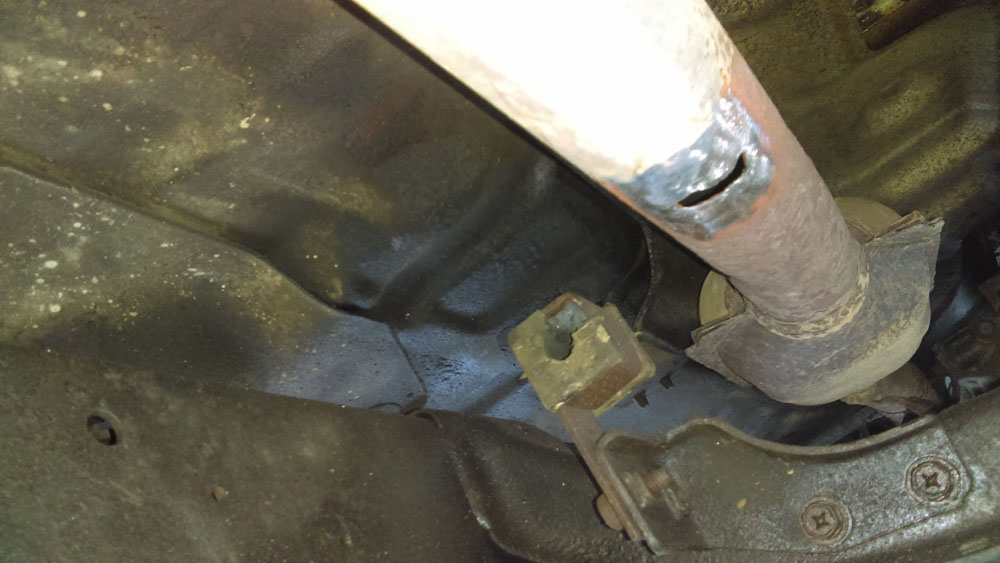 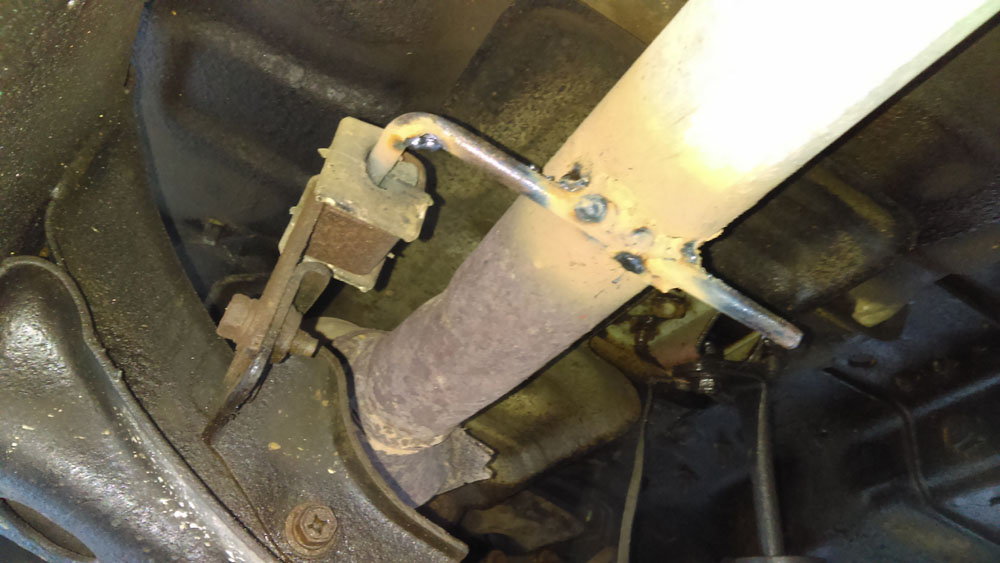 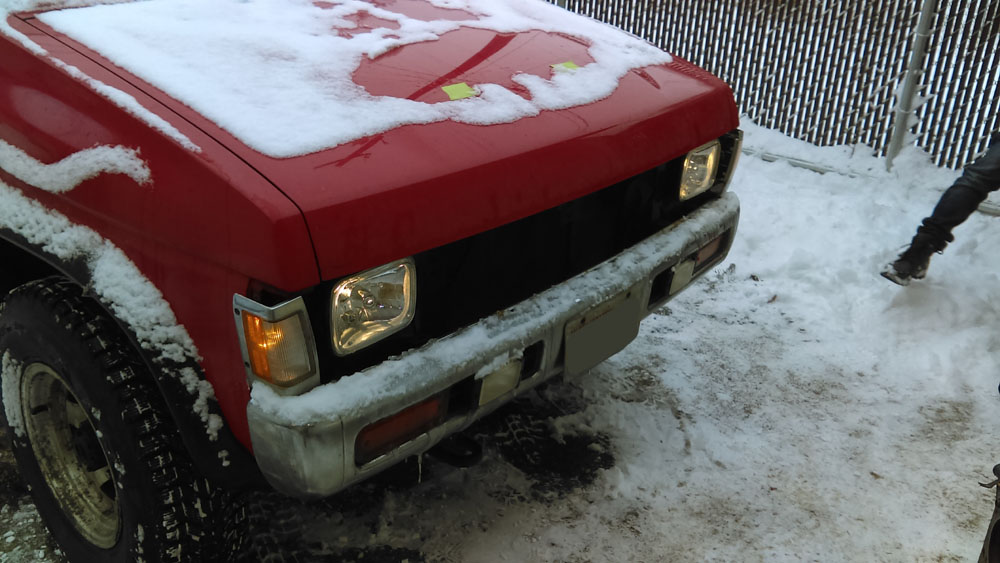 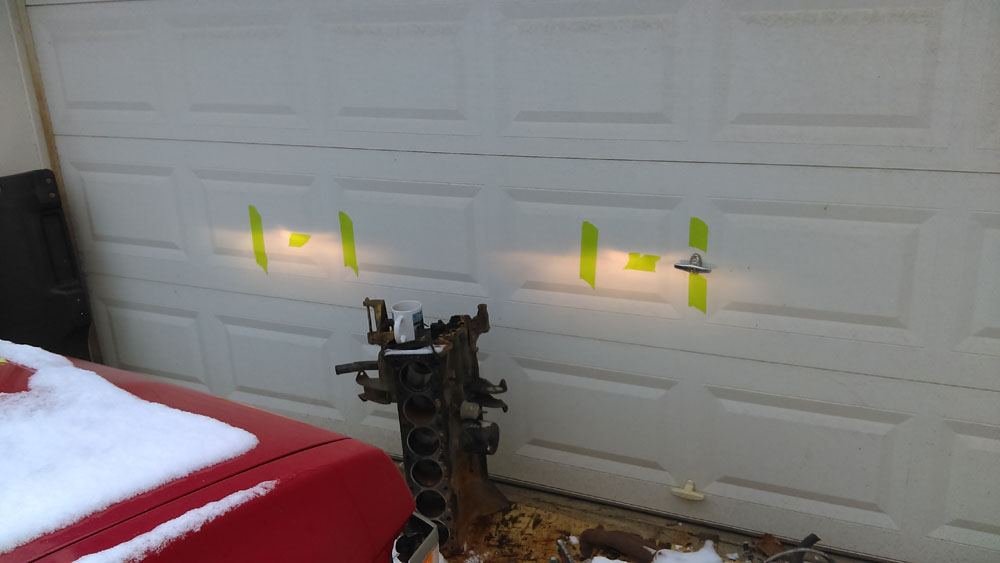 9003. No one calls them that. They are H4 lights. Yes both names for the bulb, but H4 is way more common nomenclature.


Welding on your back sucks. Welding old rusty thin wall metal sucks. That is just a sucky job in general.
Top

I have been there before dude. Welding right there does suck, unless you have a lift. I had to weld the blue b210 exhaust together with no mask. It's a fucking nasty nightmare. I'm embarrassed about it.
8========D ~~~ ( o Y o )

HAHAHA! Leave it to Jacob to argue with a parts guy about part numbers.

Are those Trucklites available for the 4 light systems like 510s? I'll probably stick with what I have but was just curious.
When the only tool you have is a hammer every problem starts to look like a hippy.
Top

I used "Autopal" brand ones. They were pretty nice. You can also use "VisionX" brand ones, they are also good quality.

Well basically 9003/HB2 is the US name, H4 is the rest of the world. They swap though. And because of the different names, You can buy H4 bulbs that are higher powered which you cant do with 9003/HB2. The thing is just about every single sealed beam replacement light is advertised as H4 lights.
Top

DRIVEN wrote:HAHAHA! Leave it to Jacob to argue with a parts guy about part numbers.

Are those Trucklites available for the 4 light systems like 510s? I'll probably stick with what I have but was just curious.


Lol! Yeah, I know what he meant anyway. Of course, the famous line in the parts business is "They're all the same." Like Chevy 350 parts. All the same. Oh really? LS vs LT? Hmmm, yeah, not the same.

I don't know if they offer a conversion for the 510, haven't looked. I'd like it if they offered one for the tiny squares for the Maxima, that would help. Found those online before but don't know if NAPA/Trucklite offers them.
Top

So I have the lights in, I have them adjusted per factory spec. Maybe it's just because they're way brighter up close that they don't seem as bright long distance. Probably should have put one in and then compared to the original. Rose thinks they're brighter long distance. I don't know. I may do some more re-adjusting. Or maybe I'm just expecting too much.
Top

Foreground lighting can definitely be a problem. I imagine she sits lower in the truck and the dash cuts off more of the foreground for her.
Top

So this weekend we went to a buddy's mom's birthday party and we traveled out with mom and dad. I get there and dad tells me I have no tail lights in the rear. So I'm like, WTF? Figured I'd chance it to get back to Spokane. Got pulled over on the freeway on the way back and explained to the cop I had narrowed it down but my hands were frozen by that time. He said to run with the hazard lights on, let me loose. Sweet!

Anyway, abused some work time since I'm going to be leaving soon anyway and test the connector, test the switch. I narrow it down to a break somewhere between the switch connection and the rear taillight harness. Only about 14' of wire to check. Bah. So I about committed myself to running a new wire, then all of a sudden I see something. On the rear connector I was probing, the taillight wire was snapped in half about an inch from the connector, but it was hidden in the rest of the 8 wires in there. Looks like a chunk of ice banged it or something, it doesn't hang down, right up near the bed floor. Anyway, soldered it back up (yucky green wires, had to sandpaper) and I now have tails in the rear! Oh, and Nissan cheaped the fuck out on the wiring. 22 gauge wires for all the rear lights. You'd think they could have spent the extra money on a little bit of copper.
Top

You probably already know this but Nissan did have a recall on the d21 taillight harnesses. Yours may or may not be affected. My '95 was.
Top

I did not know that! It's always worked fine.
Top

I think it was more so the light sockets instead of the wiring harnesses. At any rate it might be something to look into.
Top

yes, but you can still find the information as it may lead to the problem.
Top

Every manufacturer's website has a service campaign identifier tab.

Click tab, enter VIN. This will show all (recalls) that are open on your vehicle and your eligibility for said campaign.

You will be able to look up owner letter from that page. From there Google the technical service bulletin and perform the repair procedure listed if you do not qualify anymore.
Updated part numbers and repair procedure will be found in TSB.
Top

Readjusted the headlights, definitely better now. Going to try some of our long lights to see if they help a bit more. We shall see. I have the bright light version in now, one step up from standard bulb. The long lights have an arguably longer beam pattern. May not be noticeable, but figured I'd check.
Top

Okay, so I don't think I posted the pictures in this thread, but long story short, the dipshit O'Reilly's driver didn't get his Ranger in park well enough and it jumped to reverse and whacked my truck earlier this summer. I had planned on making a paint booth, etc., but since I had today to do it, I hit up Pull and Save to see how far I could get. As it turns out, I'm a pretty good half-ass bodyman!

The fender needs a bit of mud, already had a little from the last time Gracie II got hit. Got it reasonably pulled out though and pretty close to the original form. Have it covered with primer for now as I just wanted it straight before winter. Actually had decent luck straightening the chrome bumper too, mainly because I couldn't find a nicer one in Pull and Save and A-Star was closed being Sunday and all.

Lower valence I think I'm going to buy new. Got a decent one, but still has dings and they just take such a beating. If it didn't attach the lower fender edge I would consider leaving it off entirely. Anyway, here's today's progress. Need to get up early tomorrow and put the windshield wipers back on, probably going to need them. And one side light plastic got broken in the hit, and the other I broke while fixing the fender. So I need to pieces of crap plastic to mount the driver's side fender light. I'll get those tomorrow.

And the cat caught a mouse and played with it for 30 minutes so I had to retrieve it and kill it for her before she let it get back in the house. Bad kitty. Good at catching, not sure she's eating them. 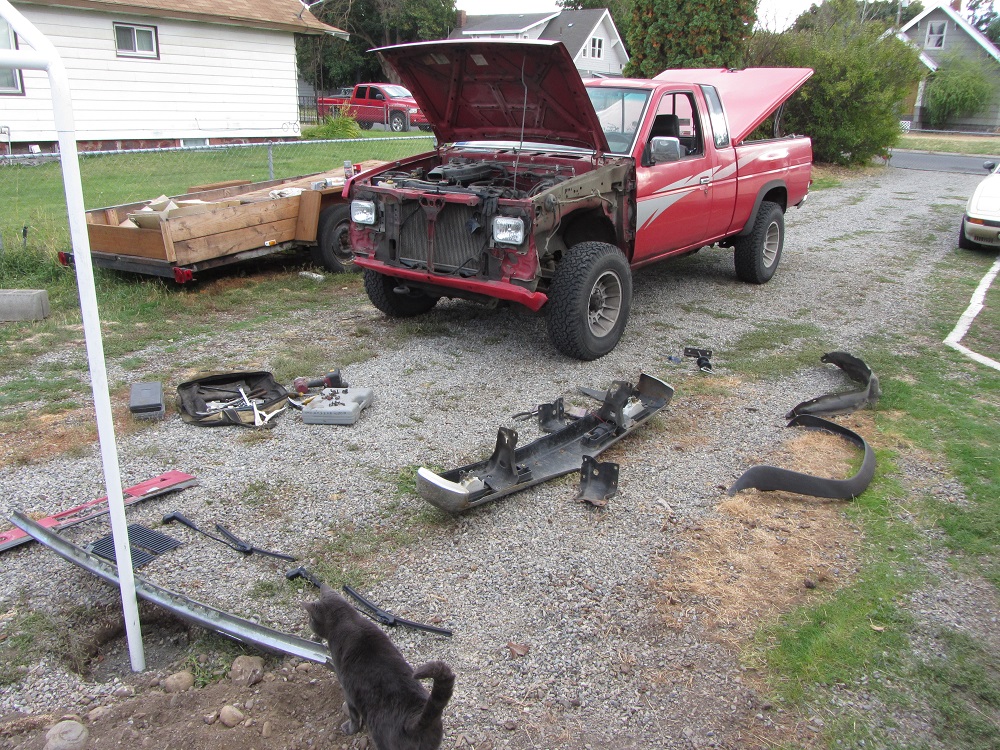 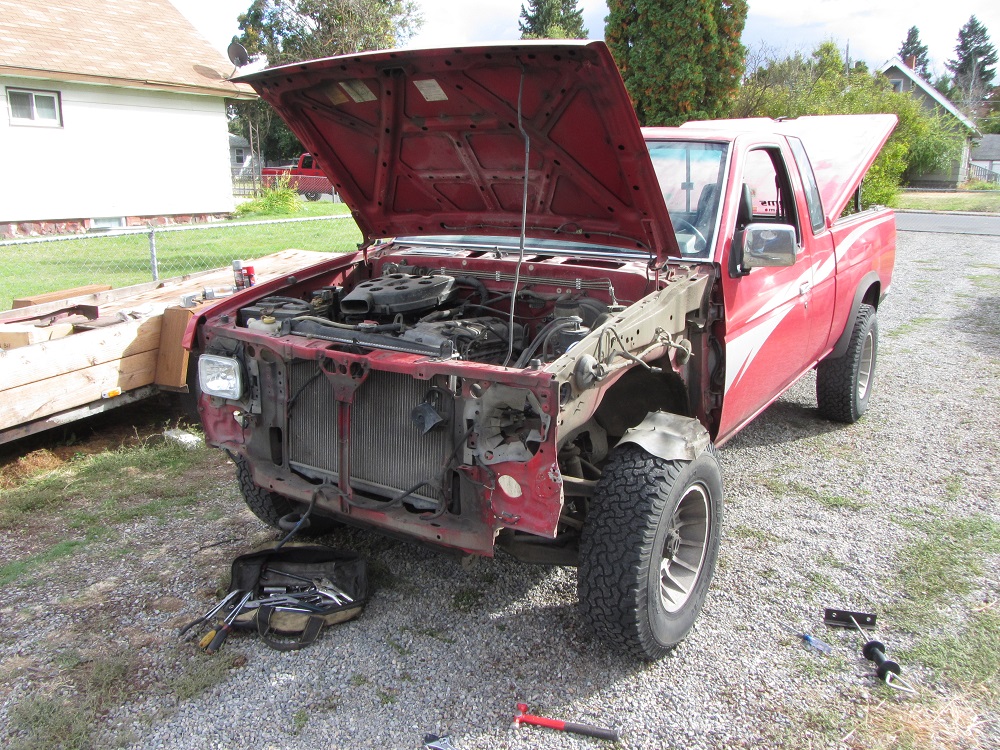 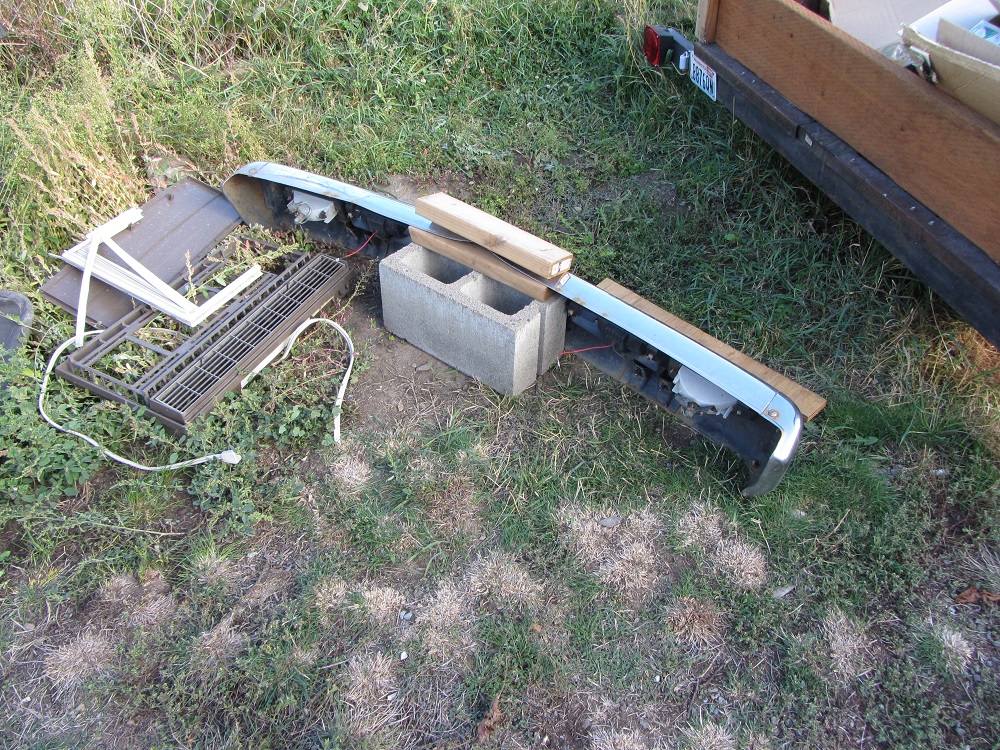 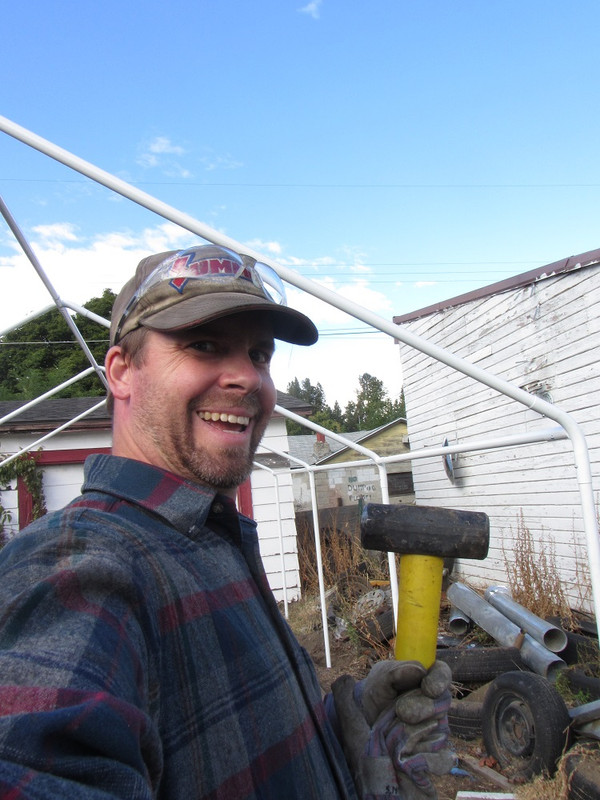 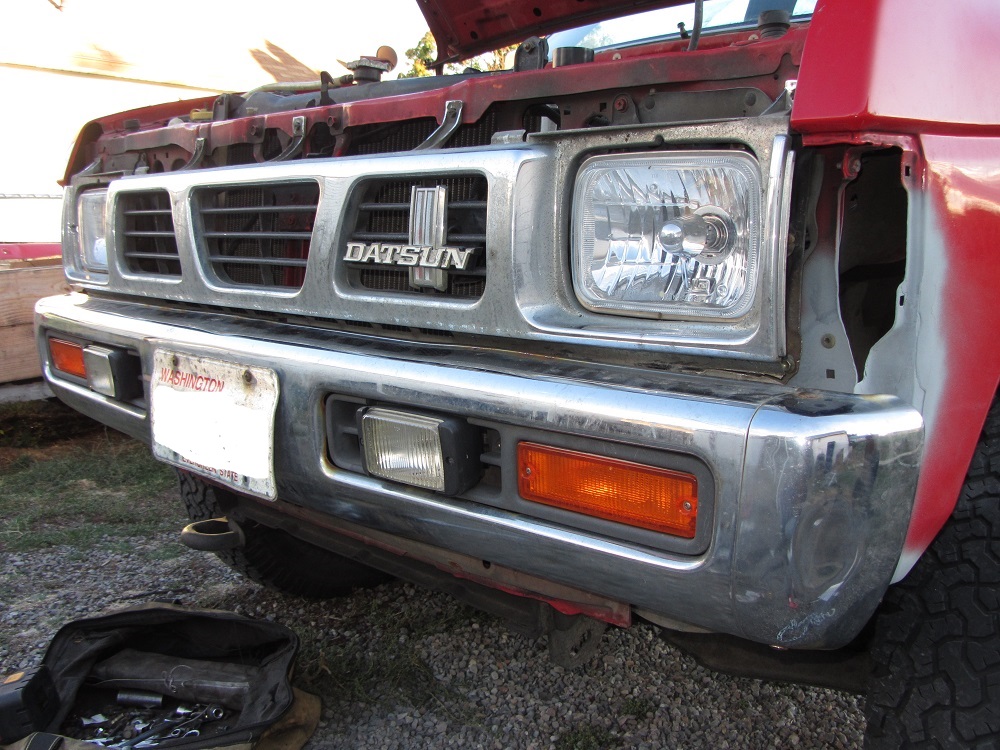 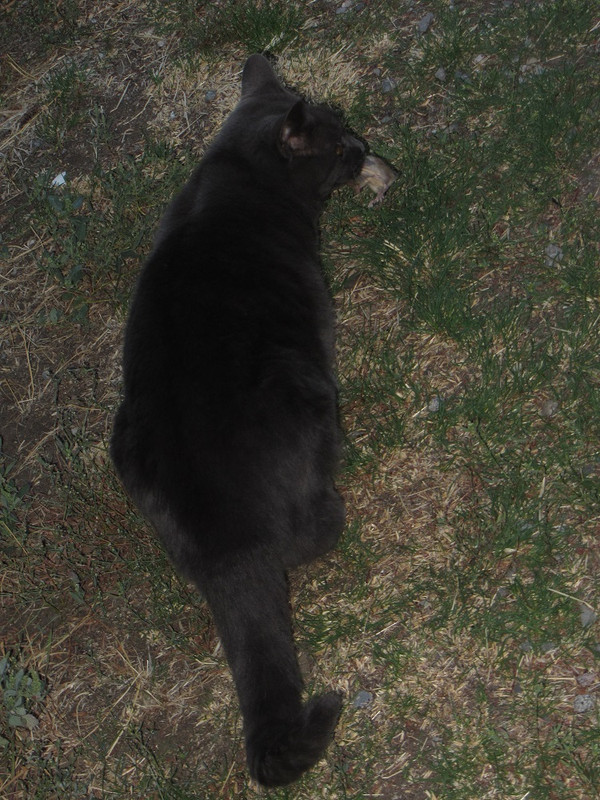