New car incoming. Well its not a car, but a SUV. And I think it was a pretty good deal. Ill post more after I hand the money over. 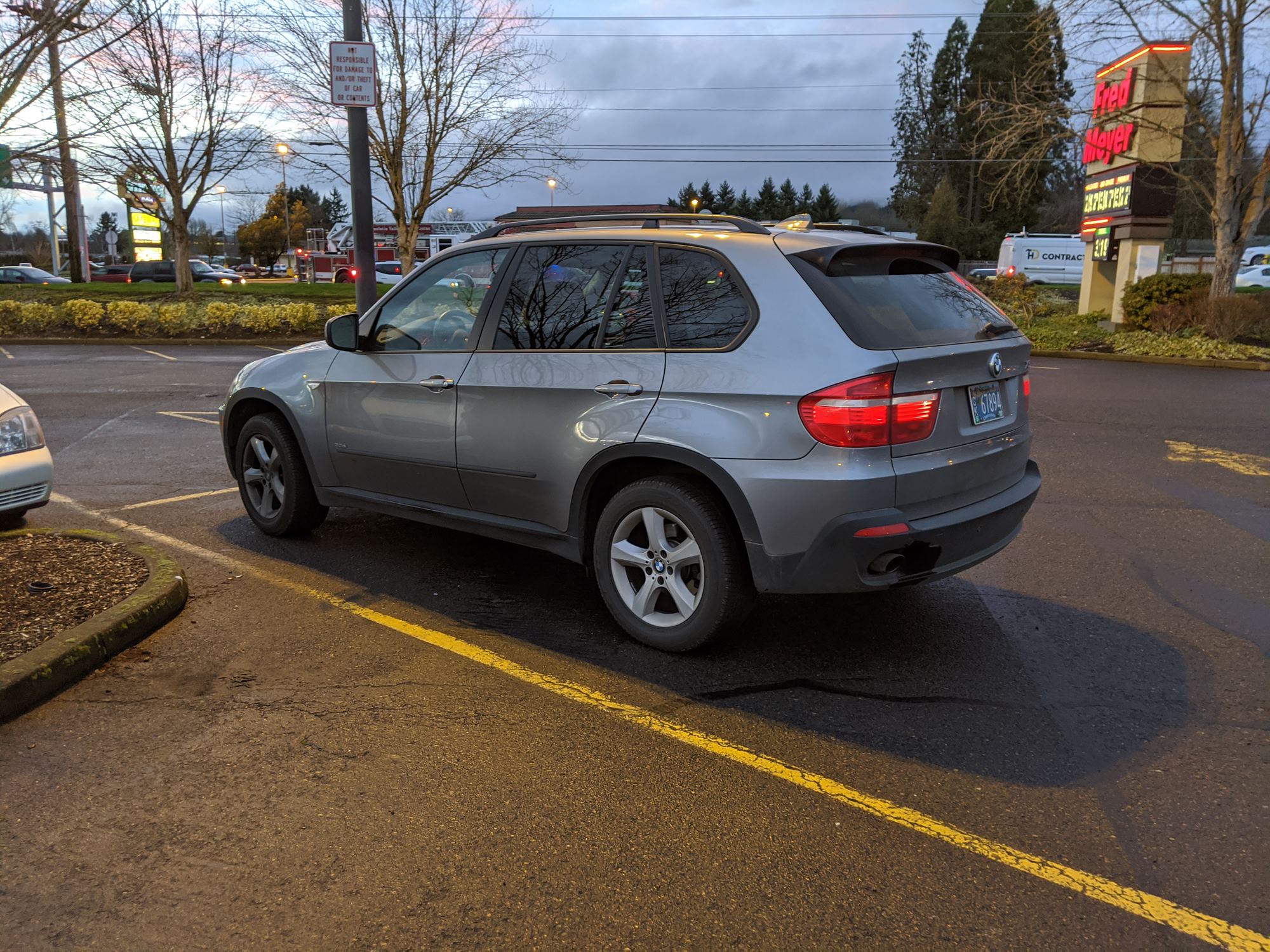 This was my bosses wife's car. 1 owner, 1 driver (son drove it for 5 minutes to grab chinese food once). Garage kept, All dealer maintained. They paid cash for it new. Car only has 70k miles. There is not a single dent on it. She said she doesn't think there is a scratch on it, but its hard to tell with the dirt (they have a gravel driveway). It is pretty loaded. Like rear heated seats, 4 zone climate control, front seats are heated and cooled.

It drives real nice, super sure of itself, but its also pretty easy to take a corner fast. And it sport mode, with its gearing, the thing rips. I passed a car on the way home, and it did 50-70 very nicely.

I kinda figured, if in a year and I dont like it anymore I could offload it easily. It will still be under 100k miles, and I will get my money out of it. I paid 7k for it.

I will clean it and get more pictures Friday.
Top


When is the N62 swap?
When the only tool you have is a hammer every problem starts to look like a hippy.
Top

I had one as a rental couple years ago. That was a pretty fun week.
Top

I never updated this... Bleh life. I have done a few things to this. Its really nice to drive. I think my favorite feature is the Auto Hold. Come to a stop and it holds the brakes for you. Makes for surprising the guy next to who is trying to get in front of you real fun, like 800rpm launch control... lol.

Anyways because I have a picture of something....

A trailer hitch has been installed! Its the OEM hitch and wiring. Need to program the car for the trailer lights to work correctly. Also, holy crap this hitch was heavy. Even with the 3.0 in it, it still has a 6000lb tow rating. 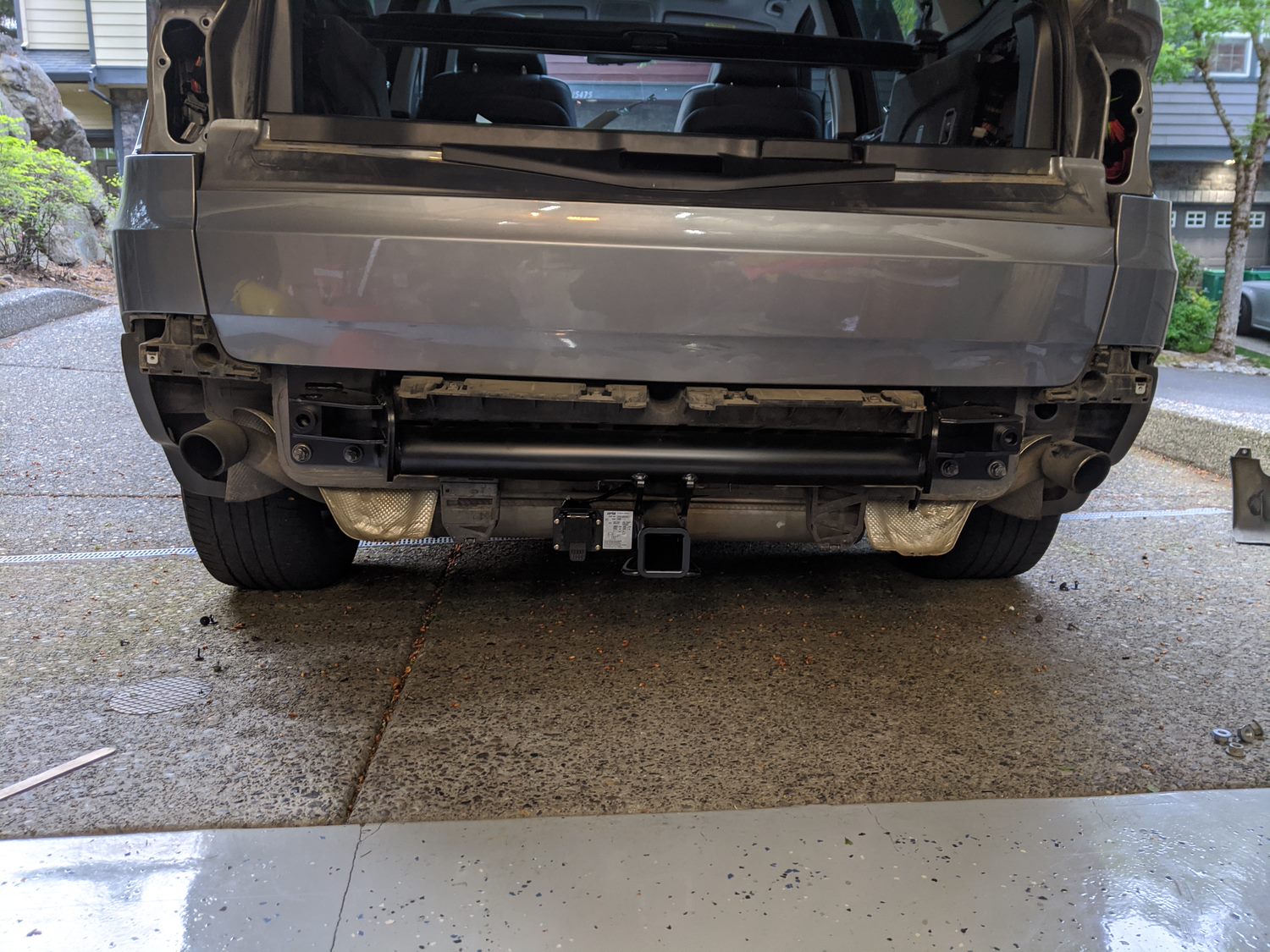 Ok. More stuff. So the factory radio left much to be desired after 12 years. This car has factory Nav (Which is something I have ALWAYS hated, but it gets you the larger screen usually). Anyways, it was a 8.8" widescreen. And the menus just looked terrible.

So I liked my Android unit I put in my old wagon. I did it again. But better. This new unit has built in 4G LTE connectivity. Which means I can run live maps without hotspotting off of my phone. It can also stream music and videos (I dont like paying for data so I dont.). And of course run any Android programs. The menus are super nice looking, the unit is very fast to respond. And best of all, it works with the factory iDrive controller. Oh and it can still be used as a dumb screen and display the factory BMW stuff.

And here is a pic of the backend back together after the hitch install. Im thinking I am going to use some BBQ paint and paint behind the opening to better hide it. And I had to make a trip to Home Depot for some plywood. So new car means new ways of transporting long things that dont fit in your car.

So here is what I did. The X5 has a split tail gate. Cool. So here you can see the upper portion is down, and the bottom open. I had to manually close the upper part. You can also see 1 ratchet strap holding the boards from going backwards. This was just extra protection, I dont think they would have.

Hear you can see a bit more of what I did. You can see the above strap goes up to one of the Anchor points on the floor in the car. The camo strap going across is doing most of the work. I looped it around the boards and down to the floor. Tight enough it bowed the boards downwards. Straps made a nice twang sound. Not going anywhere. 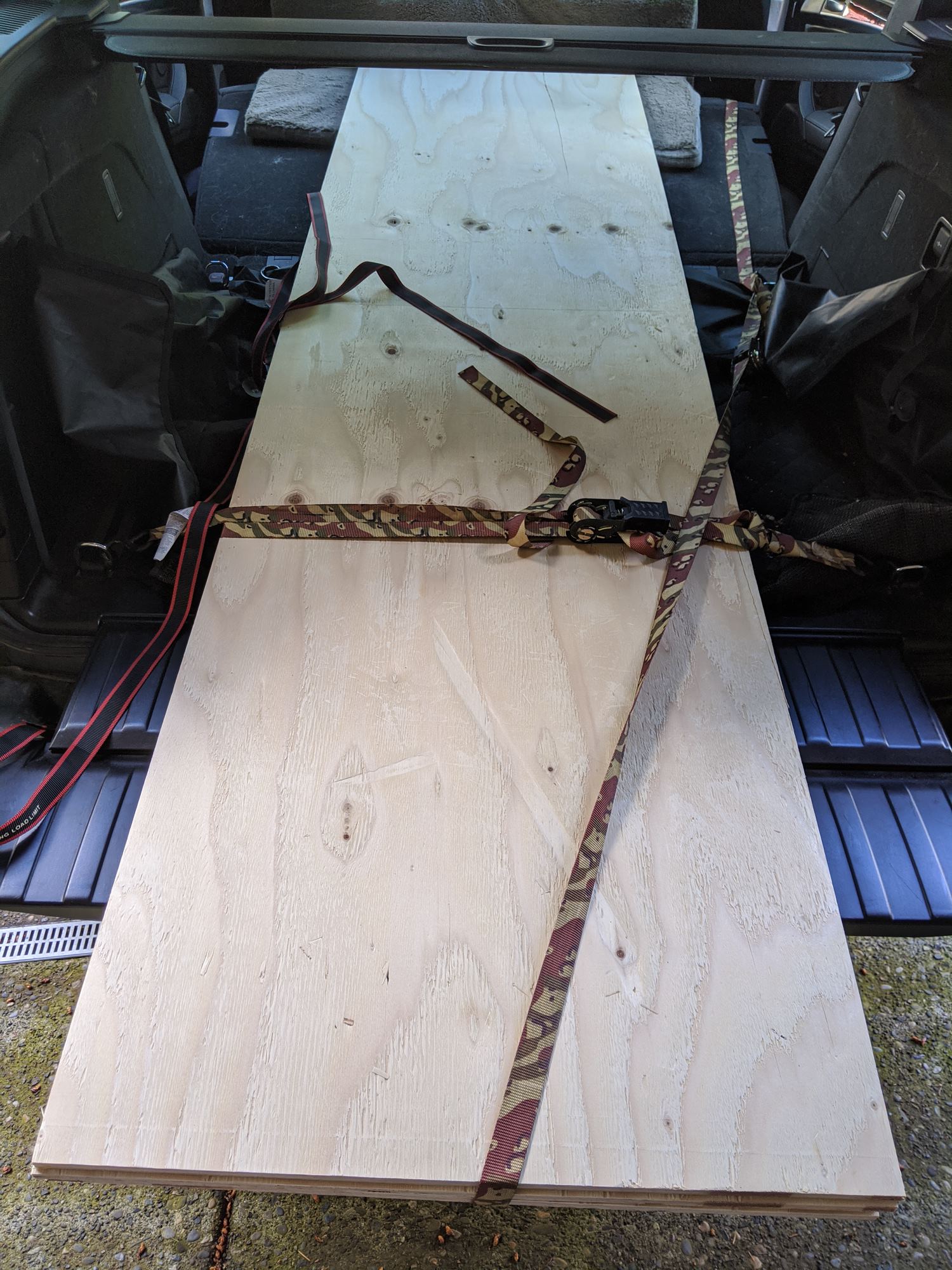 And to make sure the hatch stayed closed since it wasnt attached to anything, I ran another ratchet strap from its latch to another floor anchor spot. 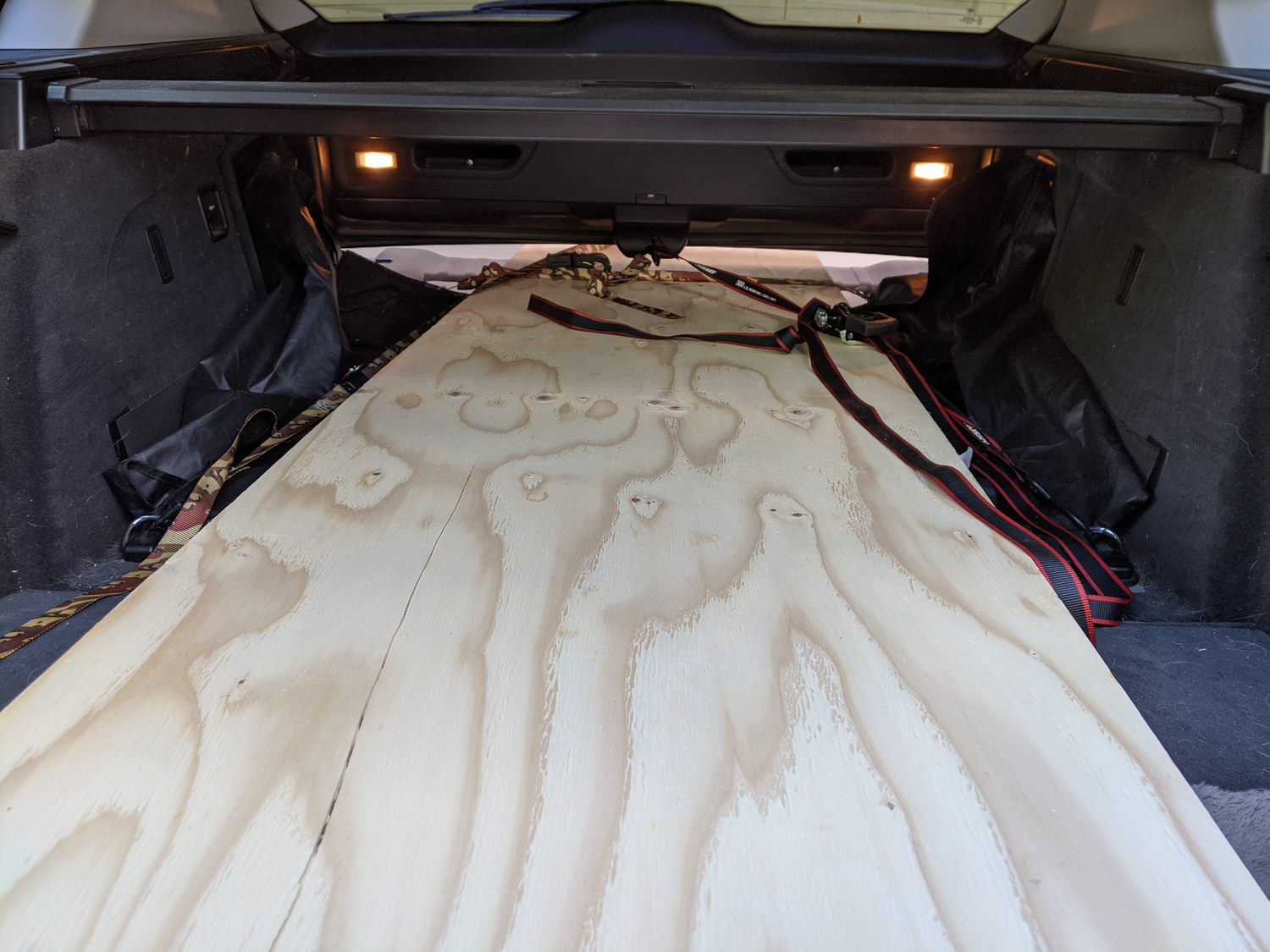 And it was all clear sailing. And yes this wood is for a project I am hoping to update on very soon.
Top

Nice.
Didn’t realize you had a split tail gate.
useful is useful !

I totally forgot. I got the windows tinted back in February. 25% all around. Ceramic. 3M brand. Supposedly 99%UV rejection, and 59% solar heat rejection. Ceramic is supposedly like 3-5X better at heat rejection than non ceramic.

Well with summer here, I got more done. Had the sunroof tinted in 80% Ceramic. No need for dark there, but the UV and Heat rejection is welcome.

And finally, the roof on this thing is tall. Like I keep getting the sun in my eyes driving it. So I had a sun strip added, at 25% as well. I picked it up after sundown. So I couldnt test it. But it looks perfect. 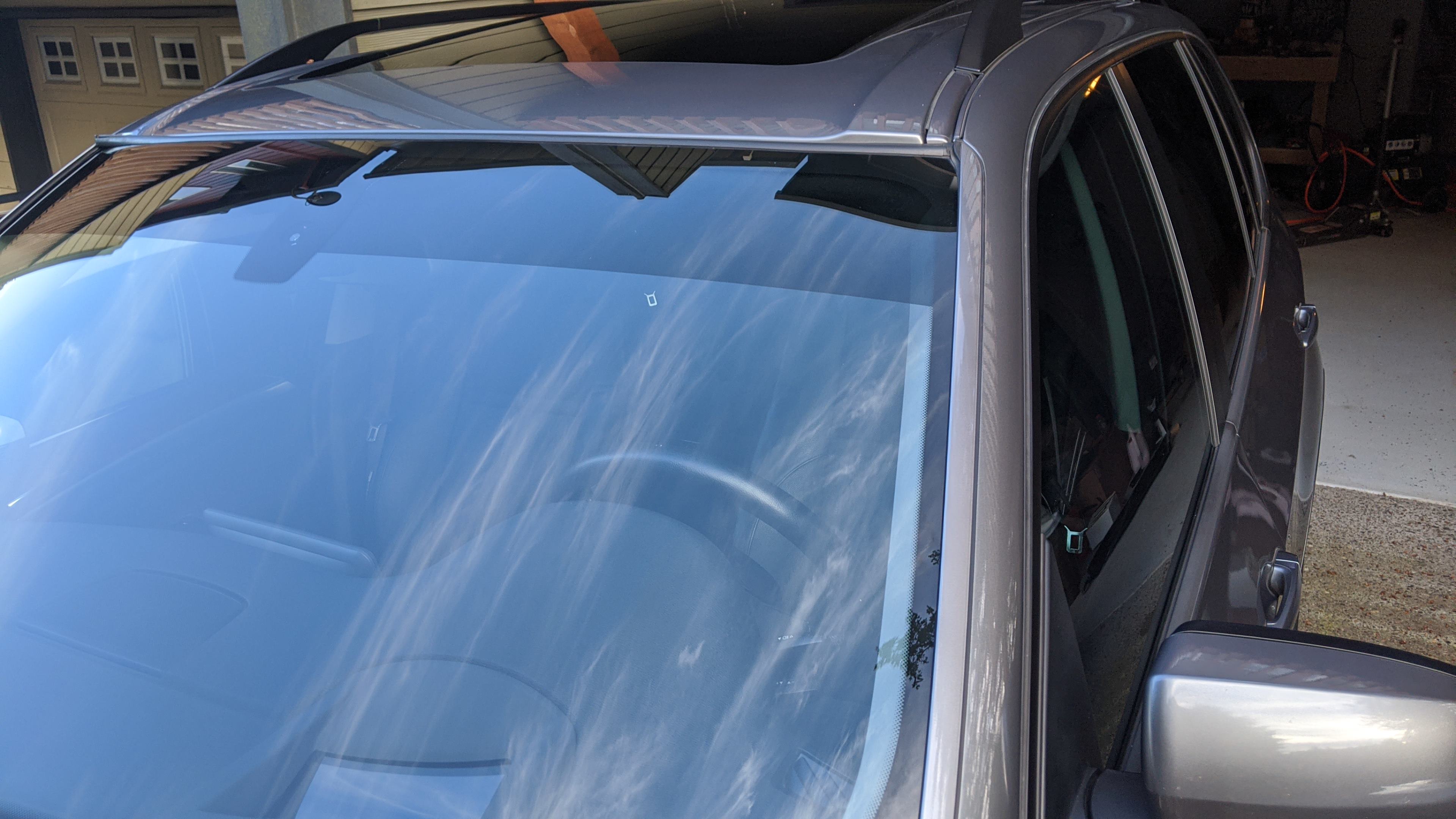 All that would be pretty mandatory where I live.
When the only tool you have is a hammer every problem starts to look like a hippy.
Top

I should mention. While it was being worked on. I got to drive my moms brand new Mercedes. The windows on that are not tinted. I was amazed by how much heat was hitting the side of my face from the sun. I have been driving a tinted window car for the last 6 years. It makes a huge difference.
Top

Tires and Oil. Pretty much the same thing.

New tires for this thing. Falken Wildpeak A/T Trail. They have the snow 3 mountain peak symbol, a 65k mileage warranty, and they are smooth at 70 on the freeway. This is apparently the tire all the Subi guys run. I think it looks good, not overly aggressive. Basically it seems to be a great hybrid All Season, Mild Trail, and Snow tire. Also ride quality... I think is better, but of course it had Run Flats... with a spare tire... 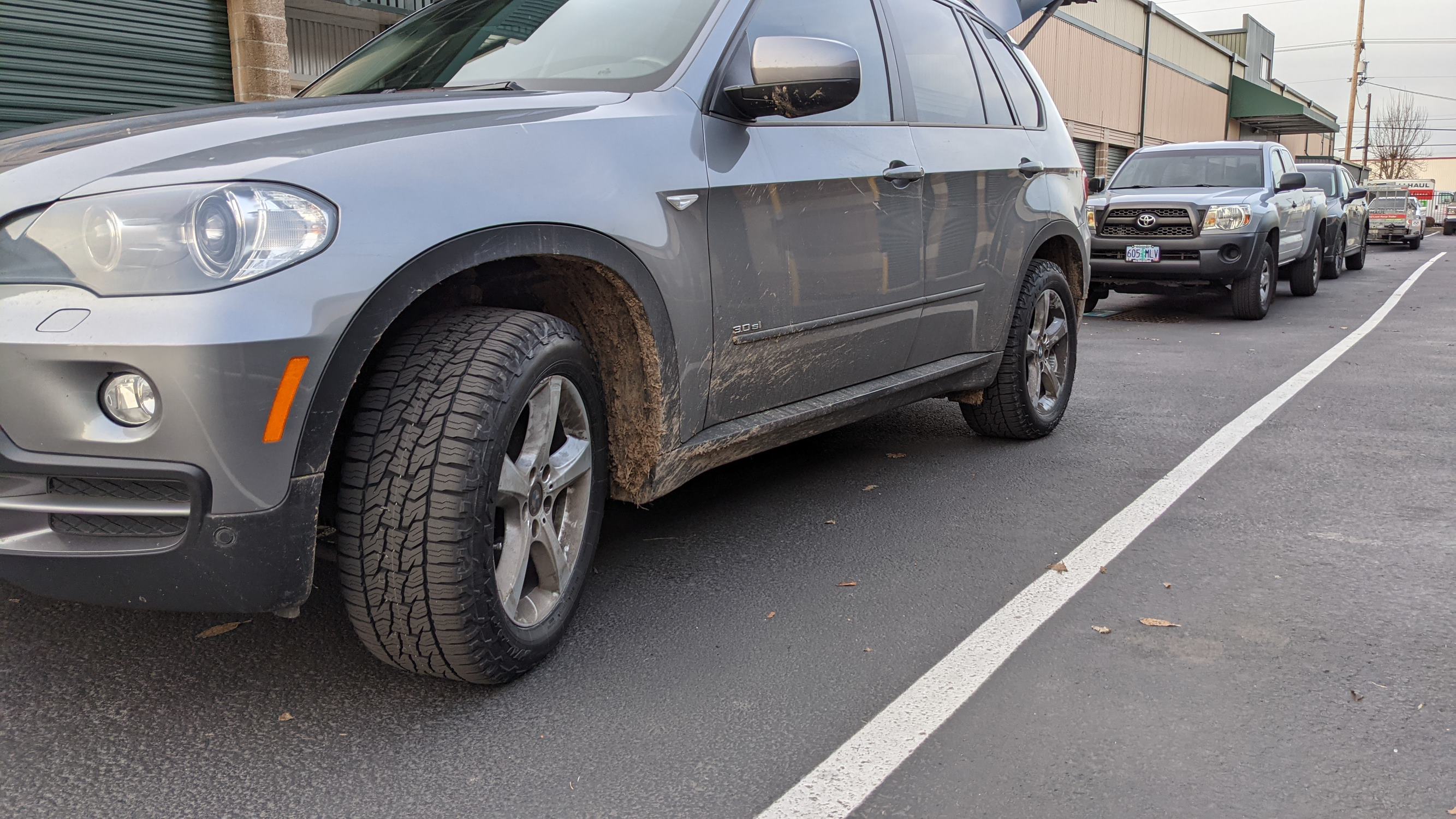 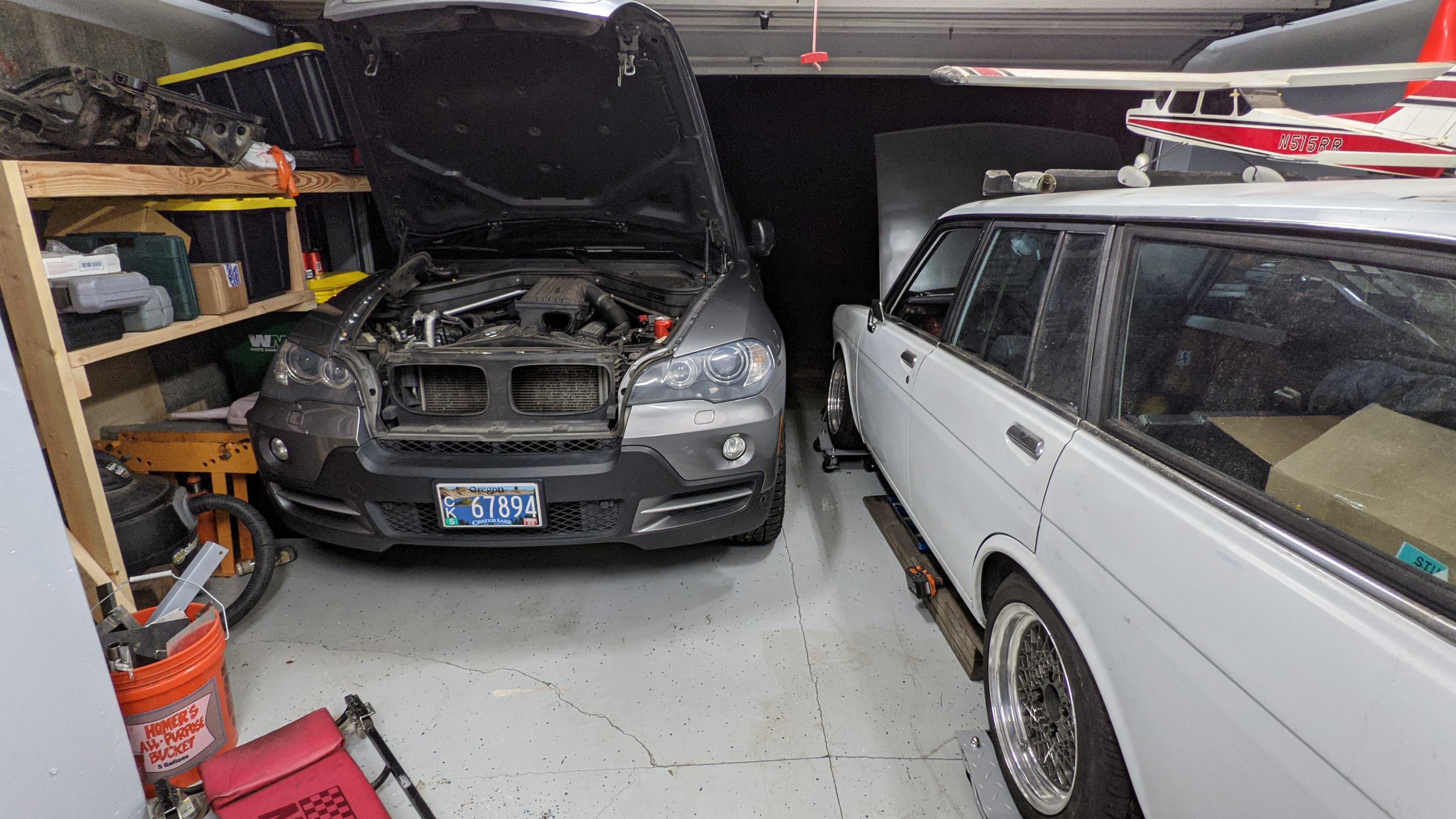 So you fly model airplanes?
“The difference between genius and stupidly is that genius has its limits” Albert Einstein
Top

Um. I have flown model airplanes.

That one never flew, never had a motor installed. If it ever flys it will be electric, but I really just need to get rid of it.

I did build a little foam board Corsair and got it functioning this summer, but never flew it.
Top

Back in December, the Farm(my friends parents farm, we have a fire pit there) got a bit muddy. I had some fun.

Oh and at some point this car started throwing traction control, abs, and 4wd errors. Diagnosing brought me to the battery, but what I actually found was standing water under the cargo floor. Turns out a sunroof drain got clogged and leaked internally. This also happens to be where the transfer case module lives. So it was getting a bit wet and throwing weird codes. All better now with a $15 hose from BMW.
Top

Laecaon wrote: ↑
Thu Apr 01, 2021 8:59 pm
Oh and at some point this car started throwing traction control, abs, and 4wd errors. Diagnosing brought me to the battery, but what I actually found was standing water under the cargo floor. Turns out a sunroof drain got clogged and leaked internally. This also happens to be where the transfer case module lives. So it was getting a bit wet and throwing weird codes. All better now with a $15 hose from BMW.

Well that seems to be a theme for these AWD BMWs. If anything fails from any of the subsystems it wipes out all of them.

New issue, same result. But with the error messages now, I also had severe AWD binding at low speed, apparently the car goes to RWD only... Oh whats that? a $8 fix with 1 day Amazon shipping? Doesnt sound too bad.

On the side of the transfer case is a actuator. This actuator is an electric motor that drives a worm gear that then drives a large plastic gear which then turns something in the transfer case. Well over time (like in the 80-120k mile range) the gear begins to get stripped out from the worm gear. The cheap fix is to replace that gear individually. Luckily there is a guy who sells a carbon kevlar infused nylon gear as a drop in replacement on Amazon, and it was only $8 so score!

Overall the surgery was easy enough, remove 2 panels under the car, support the tranny, unbolt the transfer case crossmember, remove the actuator. Then figure out how to take the actuator apart.

This is actually a picture of the new gear going into the actuator.

And the next 2 photos are of the old gear showing how it was starting to be worn out. 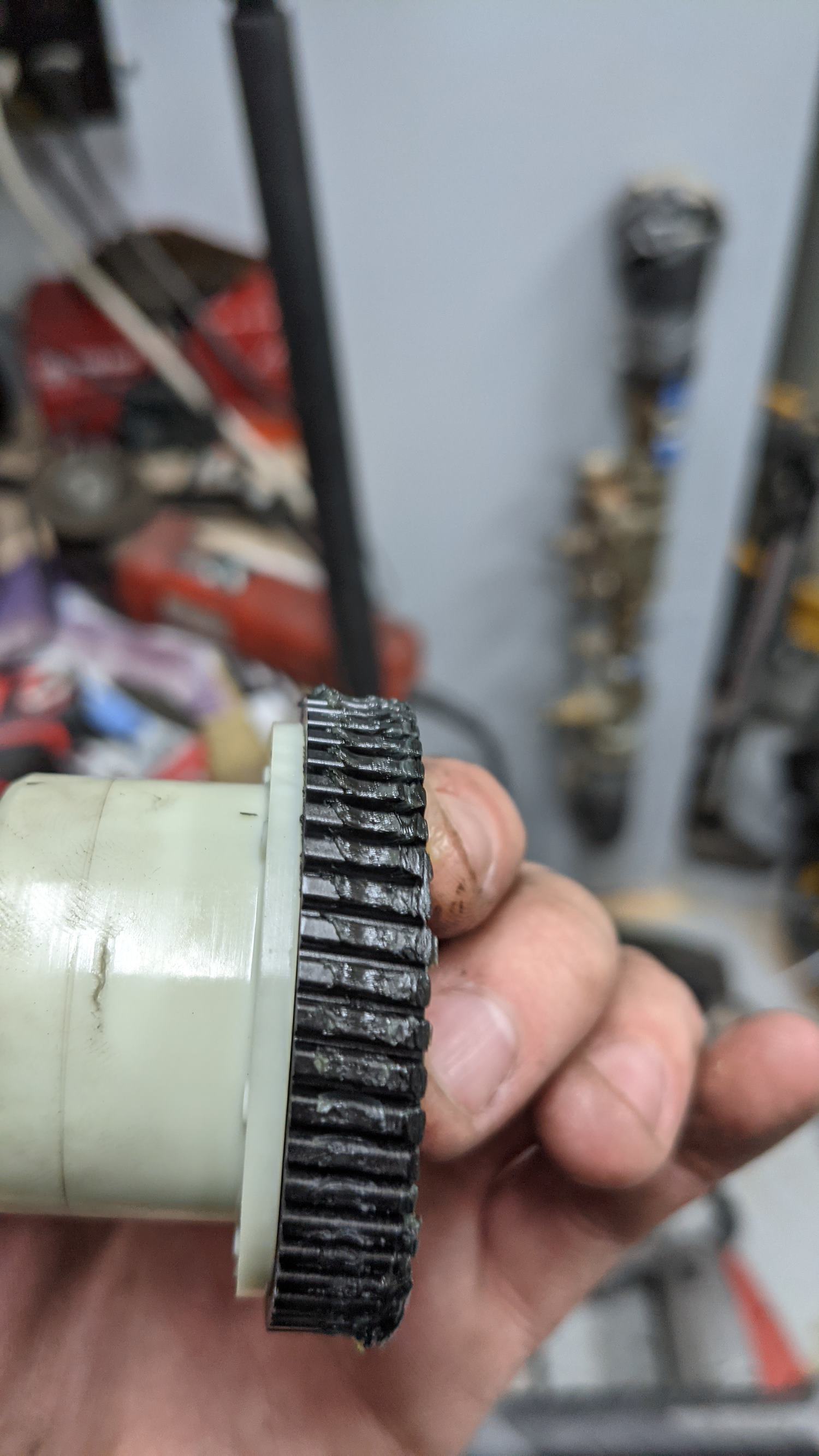 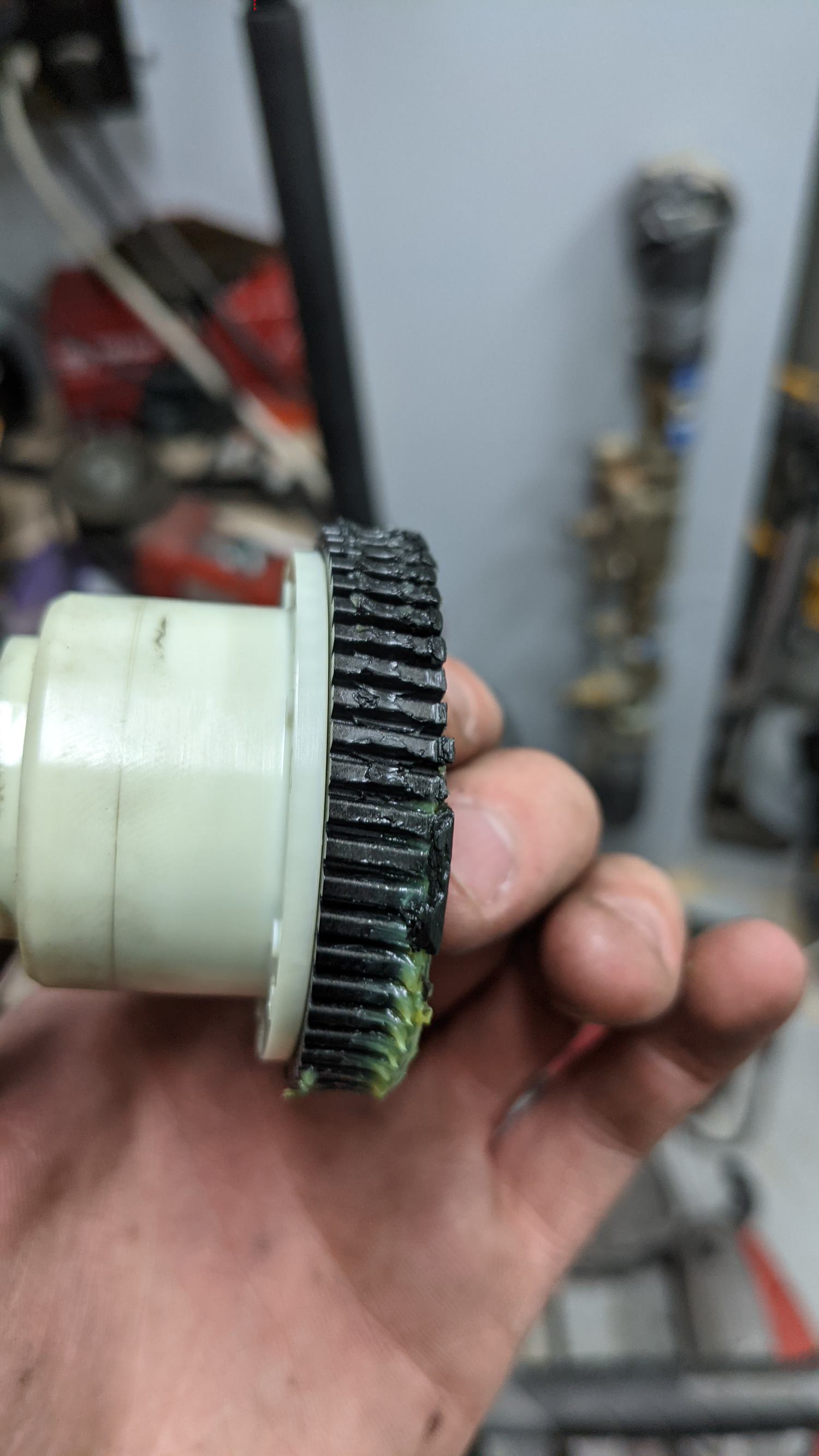 Well done. I love these kinds of simplistic happy ending repairs. Seems like a BMW quirk.